A major shift in India’s geo-economic imagination with Russia

The Chennai-Vladivostok maritime trade corridor is expected to cover the Sea of Japan, East and the South China Sea through Malacca Strait to reach the Bay of Bengal.

Every crisis coincides with opportunities. There is nothing unethical or ethical about this trajectory of history. This irony constitutes the very nature of the crisis. This is how history functions. The ongoing conflict between Russia and Ukraine is, of course, a disturbing reality for the people who are suffering. But this crisis also creates significant opportunities for the countries to secure their interest.

On the question of the current war in Ukraine, India has unequivocally expressed its support for a peaceful and diplomatic solution to the crisis. It has not responded to the crisis the way the US expected it to do. On the matter of sending humanitarian aid and medical supplies, India has played a pioneering role. Russia, on the other hand, expresses emphatically its desire to expand its trade ties with India, knowing the latter’s absorbing capacity and vast energy requirement, in order to revive its sanction-stressed economy. This provides an opportunity for India to capitalise on this offer and to diversify its energy dependencies. The Biden administration’s sanctions have not touched the Russian export of energy to Europe. Moreover, the European Union heavily depends on Russia’s oil to sustain its burgeoning economy. 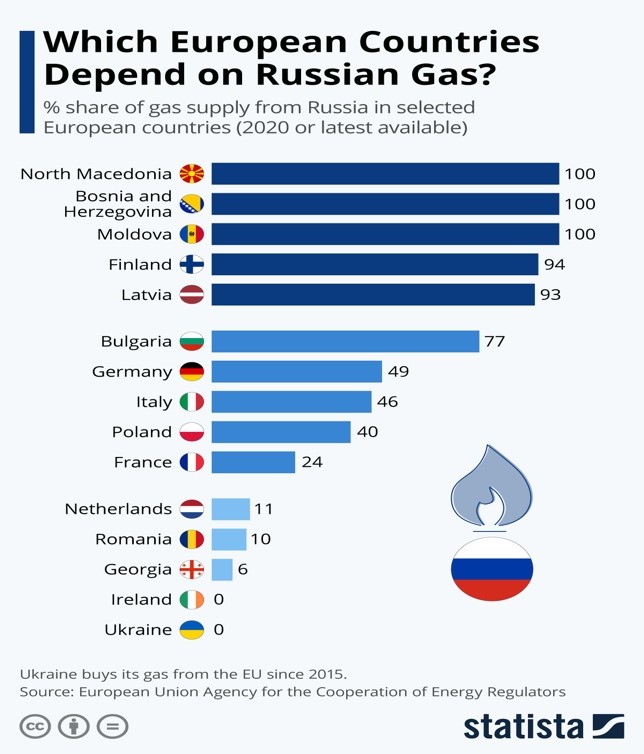 European Union Agency for the Cooperation of Energy Regulators, taken from “Which European Countries Depend on Russian Gas”, Statista, 24 February 2022

This explains the quantum of dependencies that the EU has on Russia. Other nations, including those from Europe, still import their earmarked energy requirements from Russia unaffected by the sanction promotionism of the US. This is the right opportunity that comes effortlessly to India, and it should show its right inclination and clarity of intent to benefit from it. This geopolitical churn is seemingly giving India the much-needed scope to expand its interest. Then the question arises as to what is the modus operandi to materialise this prospect and what way it might serve India’s geo-economic, geo-strategic and geo-political interest.

The Modi-Putin joint declaration in 2019 to initiate the Chennai (India)-Vladivostok (Russia) maritime corridor is going to play a major role. The India-Russia joint trade commitment will diversify significantly India’s trade space. New Delhi’s energy dependencies on the West Asian nations, Africa, and the US for the major part of its requirements will be relatively relaxed. The Chennai-Vladivostok maritime linkages were not a new phenomenon. It was very much operational between 1967 and 1969 by the shipping company FESCO; and the shipment took nearly 90 days given the shipping technology at work then following the maritime route Nakhodka, Hong Kong, Singapore, Calcutta, and Madras.

The proposed Chennai-Vladivostok maritime connectivity was crystallised at the policy level during Prime Minister Narendra Modi’s visit to Vladivostok to attend Eastern Economic Forum (EEF). The Memorandum of Intent (MoI) signed thereof is illustrative of the interest of both the nations to expand their trade participation.

The proposed corridor is expected to take 24 days from Chennai port to Vladivostok comprising 5,647 nautical miles in comparison to the traditional European route operationalised in 2000 from the Port of Mumbai to the port of St Petersburg, Russia, through the circuitous route covering Red Sea, Mediterranean Sea and Baltic sea taking 40 days to cover the distance of 8,675 nautical miles. The Chennai-Vladivostok maritime trade corridor is expected to cover the Sea of Japan, East and the South China Sea through Malacca Strait to reach the Bay of Bengal.

The areas of economic engagement with Russia include transport, energy, agriculture, industry, and space. The India-Russia Inter-Governmental Commission-TEC in 2019 set the target of $30 billion by 2025. The Covid-19 pandemic paused the intended progress in that direction. But the current global geopolitical pressure on Russia creates fresh opportunities for both countries to augment their trade space. The US sanction on its SWIFT modalities used by Russia for international transactions opens up the alternative areas of Ruble-Rupee one-on-one transactions without involving any third party.

Moreover, India’s energy needs are going to increase rapidly as it strives to come under the bracket of a $5 trillion economy; and necessary efforts are very much on track. With its increasing domestic demand for energy, to have Russia as an option is always a profitable move. With the unfolding of trade alternatives, there is a greater demand for infrastructure revitalisation. In the eastern coast, the refinery infrastructures are just barely satisfactory in comparison to the capacities in the western coast as India receives a larger quantity of crude through the Arabian sea.

In the eastern coast, India is developing the LNG terminals one at Kakinada, Andhra Pradesh, Dhamra, Odisha, to receive LNG as there is a growing domestic demand for this as India is taking the leading role in reducing carbon emission. The existing LNG import terminal at Ennore, Chennai, is going to play a pivotal role in LNG-related import and distribution. The wide demand for natural gas across the globe in the event of growing concerns over the deteriorating standard of ecology owing to unabated carbon emission is going to position Russia as one of the leading exporters alongside Qatar. India’s effort in this regard to augment its capacity to receive LNG to distribute inside the country and to export to the BIMSTEC countries and southeast Asian countries. The refinery capacities of India and its other related infrastructures, primarily in the eastern coast, are going to give India a leadership role in the Indo-Pacific.

Above all, observing the prospects India is going to have if it accepts Russia’s proposal and works on the resolutions made in the India-Russia bilateral summit in 2019, the first thing that India must do is to enhance the related infrastructure. Infrastructural bottlenecks, primarily in the eastern coast, are seemingly the only hindrance. If this area is adequately taken care of, nothing can stop India from becoming a leading power in the years to come. Moreover, from the geopolitical perspective, China is apparently trying to express its hegemony in the Indo-Pacific. The proposed Russia-India economic ties, if clicked, will make India a significant competitor in the region. Its friendly relation with South Korea and Japan and the ASEAN and its democratic credentials and cultural ties through Buddhism and the historical connection it has with many nations in the region are going to come to its aid.

Objection from China is less likely to be seen as Chennai-Vladivostok corridor involves Russian interest. The alleged monopoly of China in the Indo-Pacific trade space will find a fitting competitor in the form of India. This will lead to the balance of power and act as a significant deterrent to Beijing’s belligerence in the region. China may recoil at the face of determined and effective competition posed by India. From the geostrategic point of view, India’s active and engaging presence in the Indo-Pacific in the context of trade provides it the necessary strategic footing to tackle the whimsicalities and bullying propensities of Beijing.

Petrol and diesel prices; here’s what you need to pay in your city today on 25 April 2022

Petrol and diesel prices; here's what you need to pay in your city today on 25 April 2022