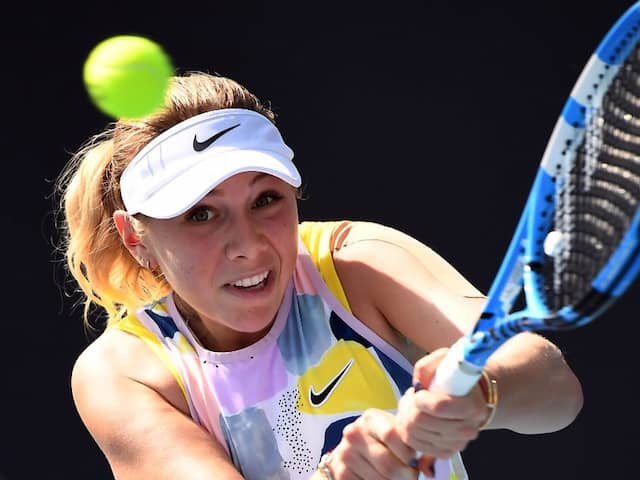 
Amanda Anisimova saved a match point en route to a 5-7, 7-5, 10-2 victory over fellow American Caroline Dolehide at the invitational women’s tennis tournament in Charleston, South Carolina. Anisimova, 18, was staring at defeat when she trailed 5-7, 3-5 against her hard-hitting opponent, but the 2019 French Open semi-finalist blasted a forehand down the line to save match point and turned the tide, eventually triumphing in a 10-point tiebreaker. She said the challenge of clawing her way back was just what she’d missed with the WTA Tour shut down in the midst of the coronavirus pandemic.

With the WTA slated to resume play in Palermo on August 3, this week’s 16-player team event in Charleston — on the green clay courts that normally host a WTA event each year — is a chance for players to gain a little match experience in the disrupted year.

“That’s why I miss being out here, just trying to face challenges and get yourself back together mentally as quick as possible,” said Anisimova, who won 25 of the match’s final 28 points.

Azarenka played just one WTA match in 2020 before the coronavirus shutdown and it showed as Collins raced through the opening set, winning seven straight games on the way to a 6-1, 2-0 lead.

Collins, who reached the semi-finals of the 2019 Australian Open, wobbled slightly at the last.

She dropped her serve on match point at 5-4 in the second but promptly broke back and finished out the win.