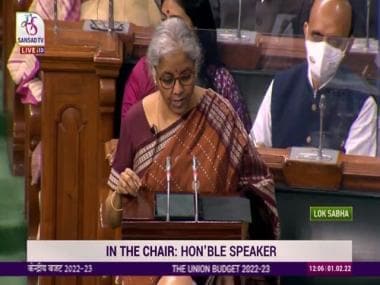 While the Nirmala Sitharaman’s focus on infrastructure, digitisation and growth garnered praise, many were disappointed by the lack of change in personal income tax slabs

Finance Minister Nirmala Sitharaman’s Budget presentation has led to a variety of reactions today, 1 February. While the Finance Minister’s focus on infrastructure, digitisation and growth garnered praise, many were disappointed by the lack of change in personal income tax slabs.

Several people were also appreciative of the 35 per cent increase in capital expenditure in the upcoming fiscal year.

Union ministers Rajnath Singh and Kiren Rijiju praised the Union Budget 2022 for its focus on growth. However, opposition leaders including Rahul Gandhi and Mamata Banerjee criticised the Budget for not focusing on the needs of the common man.

Here are some of the reactions to the Union Budget 2022-23 presentation:

Home Minister Amit Shah stated that the Budget will help the country become the world’s leading economy and take advantage of economic opportunities afforded by the coronavirus pandemic.

Defence Minister Rajnath Singh declared that he welcomed this year’s Budget wholeheartedly. He also stated that the digitisation of land reforms will help transform the country’s rural economy and create new opportunities for farmers and the agrarian sector.

Digitalisation of land reforms will transform India’s rural economy and it will go a long way in creating new opportunities for the farmers and the agriculture sector.

Union Law and Justice Minister Kiren Rijiju asserted that this year’s Budget was inclusive and took care of people from all sections of society “including the poor, rural & border areas, and the people living in the Northeast”.

This is a very good Budget. It is a very inclusive Budget that takes care of the interests of every section of society including the poor, rural & border areas, and the people living in the Northeast: Union Minister Kiren Rijiju pic.twitter.com/hwrNFV9up7

Union Minister for Women and Child Development Smriti Irani stated that the schemes laid out in this year’s Budget will position the country at the centre of the emerging global economy. She also praised Prime Minister Narendra Modi and Sitharaman for this year’s futuristic Budget and called it the “blueprint for India’s Amrit Kaal”.

Congratulations to PM @narendramodi Ji & FM @nsitharaman Ji for a futuristic #AatmaNirbharBharatKaBudget laying the blueprint for India’s Amrit Kaal. Emphasis on multi-modal infra & newer avenues for investment will position India at the center of the emerging global economy.

Karnataka Chief Mininster Basavaraj Bommai also praised the Budget and said that the state’s developmental activities will receive a boost due to various announcements by Sitharaman.

Thank you PM @narendramodi and Union Finance Minister @nsitharaman for reiterating our government’s motto of #SabkaSaathSabkaVikas with this inclusive #AatmanirbharBharatKaBudget. (1/2)

The Budget was, however, not without its share of detractors. Congress leader Rahul Gandhi stated that the government had presented a “zero sum Budget”, with nothing for the poor, the middle class, salaried individuals, youth, farmers and small and medium size businesses.

West Bengal Chief Minister and Trinamool Congress leader Mamata Banerjee slammed the Union Budget and asserted that it was a “Pegasus spin Budget”, referencing the controversy surrounding the government’s use of the Israeli spyware. Banerjee also stated that the Budget did not announce any relief for the common people, who are struggling with inflation and unemployment.

BUDGET HAS ZERO FOR COMMON PEOPLE, WHO ARE GETTING CRUSHED BY UNEMPLOYMENT & INFLATION. GOVT IS LOST IN BIG WORDS SIGNIFYING NOTHING – A PEGASUS SPIN BUDGET

TMC MP Derek O’ Brien also criticised the Budget. Referring to the reduction in custom duty on diamonds, O’Brien commented that “Diamonds are this government’s best friend. For the rest— farmers, middle class, daily earners, unemployed— this is a PM (Does Not) Care”.

Diamonds are this government’s best friend.

For the rest— farmers, middle class, daily earners, unemployed— this is a PM (Does Not) Care #Budget2022

Bahujan Samaj Party supremo Mayawati commented that the government was announcing new schemes to win the public over, yet it had not fulfilled promises announced in the previous Budget. The BSP supremo also slammed the government for not working towards alleviating poverty, unemployment and farmer suicides.

CPIM leader Sitaram Yechury criticised the Centre for not imposing higher taxes on the rich, asking “Why are those who amassed super profits during the pandemic, while joblessness, poverty & hunger have grown, not being taxed more?” He also questioned the government’s claim of an presenting an inclusive Budget this year.

Budget for whom?
The richest 10% Indians owns 75% of the country’s wealth.
Bottom 60% own less than 5%.
Why are those who amassed super profits during the pandemic, while joblessness, poverty & hunger have grown, not being taxed more?#Budget2022

Industrialists such as Anand Mahindra and Kiran Majumdar-Shaw gave a thumbs-up to the Budget and praised Sitharaman for focusing on growth.

Kiran Majumdar-Shaw called this year’s Budget “balanced”, and stated that the increase in capital expenditure by the government will help drive jobs and infrastructure projects.

Fiscal prudence and business ease has been the theme. 35% increase in capital expenditure will drive infra n jobs – Positive rhetoric with no negative surprises = balanced budget.

Anand Mahindra predicted that Sitharaman’s shortest Budget address may be the most impactful one she has delivered.

Brevity has always been a virtue. @nsitharaman ‘s shortest budget address may prove to be the most impactful…

FM has stayed clear of populist measures and delivered a purely growth budget. Capex increase of 35% is the biggest move in this budget.