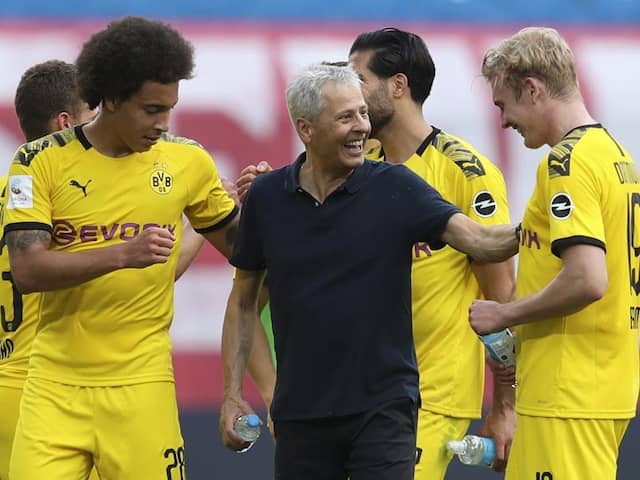 Borussia Dortmund will go into next season with Lucien Favre still the head coach.© AFP


Borussia Dortmund will go into next season with Lucien Favre still the head coach as they bid to break Bayern Munich’s monopoly on the Bundesliga, sports director Michael Zorc confirmed Thursday. “We will have the same set up in the new season. We want to go on the attack,” Zorc said ahead of Dortmund’s final game this season at home to Hoffenheim on Saturday.

There is a year left on Favre’s contract, but there has been speculation he may leave as his Dortmund side has finished second to Bayern for the last two league seasons.

Last season, under Favre, Dortmund led by as many as nine points and topped the table as late as April before finishing runners up by two points. This season they will again finish second, but trail Bayern by ten points going into this weekend’s final round of matches.

Bayern have won their last 15 matches, including a 1-0 victory at Dortmund at the end of May which effectively decided the league.

Hansi Flick’s Bayern have 79 points before their final match at Wolfsburg on Saturday, after which they will be crowned league champions for the eighth season running.

“If Bayern Munich have over 80 points, it would be hard for us, and any other team in Germany, to finish ahead of them,” Zorc admitted.

A former central midfielder who made 468 appearances for Dortmund during his career, the 57-year-old Zorc extended his contract as sports director on Wednesday until 2022.

He did rule out extending Favre’s contract past next year.

“We have a great relationship of trust internally and will have the talks in due course,” Zorc added when asked about extending Favre’s deal.

How to Create a HubSpot Login Page In No Time