‘Budget not for damads of country, but for poor,’ says Sitharaman in Rajya Sabha, accuses Oppn of creating false narrative

Hitting out at the Congress for taking the credit for MGNREGA, the Union finance minister said, ‘You may have given birth to the scheme but you left it in a mess.’ 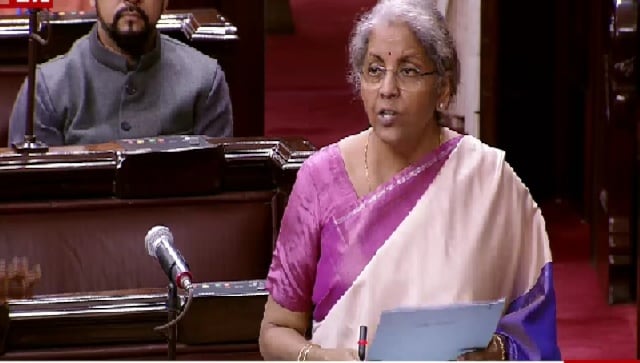 Taking a veiled dig at the Congress in the Rajya Sabha, Finance Minister Nirmala Sitharaman on Friday said that the policies of the Narendra Modi government were aimed at benefiting the poor and not the ‘damads of this country’.

An uproar ensued in the Upper House after the finance minister made the statement alluding to Priyanka Gandhi’s husband Robert Vadra.

She also alleged that a “false narrative” was being created by the Opposition against the government that it works for “crony capitalists”.

“It has now become a sort of habit for some in the Opposition to constantly allege, in spite of what we are doing for the poor, that this government only works for the cronies,” she said.

“More than 1.76 crore houses under PM Awas Yojana, 2.76 crore houses electrified – Are these for the rich?” the finance minister asked, adding that the Opposition, “is unthinkingly throwing allegations”.

Responding to former Finance Minister P Chidambaram’s allegation that “major numbers are suspect in the Budget”, Sitharaman highlighted three instances in 2007-08 Budget, saying those numbers were suspect too.

She attacked the UPA government for what she alleged was a lack of transparency. “To conclude, I don’t want competence to fudge. Narendra Modi doesn’t believe in fudging,” she said.

Sitharaman said this in reference to Chidambaram’s speech in the Rajya Sabha where the former Union minister had said that three years of “incompetent” economic management had taken the country back by years.

“He (Chidambaram) believes he can say anything and get away with it. He said this is a Budget by the rich, of the rich, and by the rich. I have already explained that our budget was for the poorest of the poor,” Sitharaman said.

‘Congress created MGNREGA, but left it in a mess’: Nirmala Sitharaman

Hitting out at the Congress for taking the credit for the Mahatma Gandhi National Rural Employment Guarantee Act (MGNREGA), she said, “You may have given birth to the scheme but you left it in a mess.”

She said the Opposition should engage in a “less emotional, but a more factual debate” on the scheme.

Claiming that it was under the Modi’s leadership that MGNERGA scheme was effectively utilised, Sitharaman said, “Centre is responsible for removing all ills from MGNERGA.”

“We have overseen the highest ever utilisation at Rs 90.469 crore of the rural employment scheme,” Sitharaman added.

The finance minister said that a much-needed post COVID-19

relief was “distinctly and immediately” provided in the Union budget 2021.

Citing examples of the relief, she said, “It is worth mentioning that 800 million people were provided free food grains, free cooking gas was provided to 80 million people and cash was directly given to 400 million people, farmers, women, the divyang and also the poor and needy.”

She also said that the 2021 financial statement was carefully thought after listening to views, suggestions and opinions from experts and economists around the country and the world.

Sitharaman said that “building an Aatmanirbhar Bharat actually represents the aspirations of 130 crore people of this country”.

“Over two-thirds of this population are youth looking for opportunities,” she said, adding “The Budget was aimed at not only giving relief packages but creating opportunities for employment.”

The finance minister said that through the Budget 2021, Centre is looking for medium and long-term growth. “Post-pandemic and post-global contraction, economies have suffered all over the world. The attempt that has been made in this Budget is to provide a strong stimulus to deal with the impact of the coronavirus

crisis and have a multiplier effect,” she added.

“The reforms that our government is introducing will bring is sustained growth. The relief and succor that was so required for the people was provided,” the finance minister said.