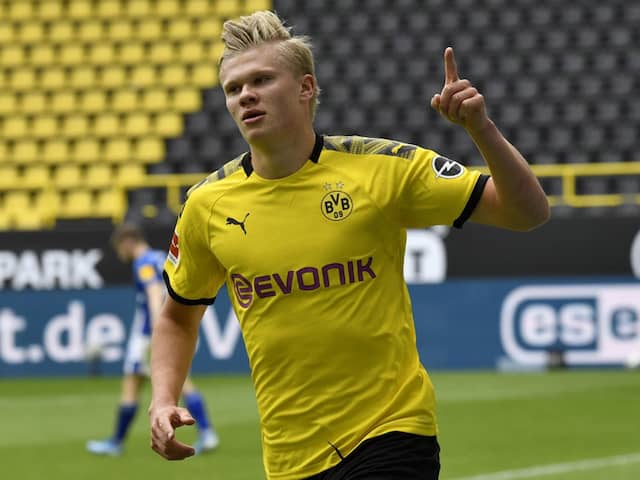 
Borussia Dortmund coach Lucien Favre insists he will resist the urge to rush Erling Braut Haaland back into the starting side to avoid putting the teenage striker under unnecessary strain. Haaland, 19, came off the bench to score Dortmund’s last-gasp winner at Fortuna Duesseldorf on Saturday which secured Champions League qualification for next season. Bayern Munich lead second-placed Dortmund by seven points with three games to play, and victory at Werder Bremen on Tuesday would secure an eighth consecutive Bundesliga title.

Norway international Haaland has scored 11 goals in 12 league games since arriving from Salzburg in January, but he has been struggling with a knee injury of late.

With a top-four finish guaranteed, Favre said Haaland is unlikely to start at home to relegation-threatened Mainz on Wednesday.

“He is 19. It’s normal that he is sometimes tired,” Favre said in Monday’s press conference.

“He’s still growing up, has been injured two or three times since he’s been here.

“We have to be careful and dose out what he does. Otherwise it will be dangerous.”

Just as he did in Duesseldorf, Julian Brandt is set to start up front instead of Haaland against Mainz.

“We have a plan with him (Haaland),” explained Favre.

“It is impossible for many players to play three games in one week,” the Swiss added, with Dortmund also facing third-placed RB Leipzig away this Saturday.

“Of course he still has to develop and has so much potential.”

US Open To Go Ahead As Planned: Reports

Welcome to the New EOnline: Here’s What to Expect From Our Redesigned Website

Welcome to the New EOnline: Here's What to Expect From Our Redesigned Website

WhatsApp could soon be used to call elevators

India’s IT and business services market to reach $13 billion by December 2020: IDC