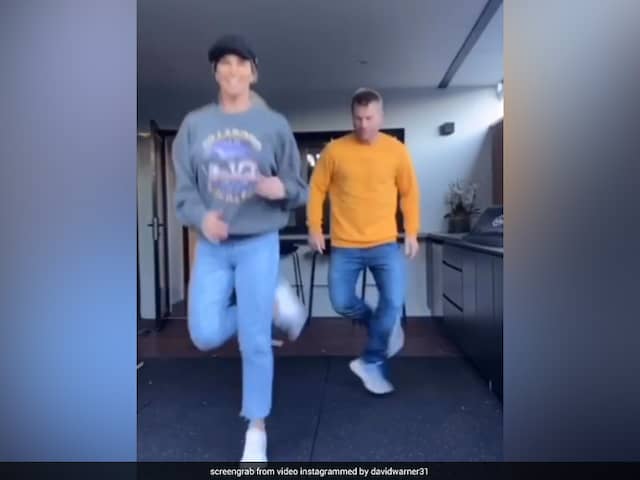 David Warner asked fans who danced better between him and his wife Candice.© Instagram


David Warner has posted numerous dance videos to entertain his fans during this coronavirus lockdwon. Like most of his TikTok videos, his dance videos, which are mostly on Indian songs, have been quite a hit among his social media followers. While Warner tried hard to dance as good as possible, many people have commented on his videos saying that he can’t dance. Like any professional athlete, Warner took all those negative feedback as a motivation to improve his dancing skills and has started learning from his wife Candice, who has featured in many of his previous videos. After wife Candice gave him a few basic tips, Warner learned how to sync with his co-partner. In his latest TikTok video which he shared on Instagram, Warner can be seen copying moves taught by his wife.

To showcase his improved dancing skills, Warner once again chose a Prbhu Deva song from movie ‘Tutak Tutak Tutiya‘. In his post Warner acknowledged fans’ negative feedback and asked them to rate whose moves were better in the latest video.

“Starting with basic tips from @candywarner1 since all the feedback is that I can’t dance  #whoisbetter #duet,” Warner captioned the video.

Ever since making his debut on popular video-sharing platform towards April end, Warner has been posting fun videos almost on a daily basis.

The Australian opener has shared a number of videos ranging from dancing on hit Bollywood songs to lip-syncing famous dialogues of Indian movie stars like Mahesh.

This was not the first time Warner chose a Prabhu Deva song to showcase his dancing skills. Last month, the explosive opener had shared a video of him dancing with his wife Candice to a super-hit Bollywood song from the 90s, featuring the Indian dance legend.

Apart from making his own videos, Warner has also been sharing videos of other TikTok creators on his social media accounts for quite some time now.