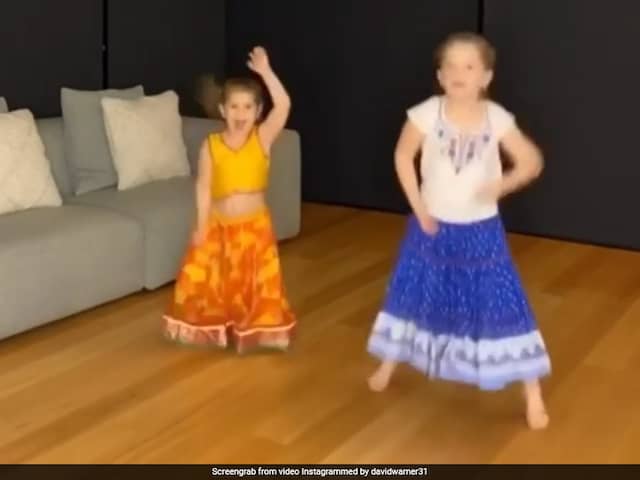 
Australia opener David Warner took to Instagram to share a video of two of his daughters dancing to the hit song “Bala” from the Akshay Kumar-starrer Housefull 4. “When your daughters want to do their own Bala dance,” Warner captioned the video on the social media site. The video, featuring his oldest daughters Indi Rae and Ivy Mae, has got over a million views so far. Warner had shared a video in May where he himself performed Akshay Kumar’s steps from the song. “I think I’ve got you covered,” he had written, tagging the Bollywod superstar.

The Warner family seems to be quite fond of the song, with the left-handed batsman sharing another video in June where his two oldest daughters are seen dancing along with him to the song.

Warner has spent the majority of the coronavirus-enforced lockdown making a series of amusing videos.

Warner’s dance video on the Bollywood hit song “Sheila ki Jawaani” with his daughter Indi became a hit among his fans and since then the left-handed batsman has been sharing video religiously, despite getting trolled from his teammates.

Not too long back Warner’s former teammate Mitchell Johnson had brutally trolled him after watching one of his many videos.

“I would say you’ve officially lost it but not sure you ever had it Bull,” Johnson had commented on a video Warner had shared on Instagram.

Australian pacer Pat Cummins, who is the number one-ranked Test bowler in the world, wasn’t too impressed by Warner’s antics either.

Cummins, during a chat with KKR on Instagram, said that if Warner asks him to feature in any of his videos, he won’t say yes to the batsman.

England vs West Indies 2nd Test: When And Where To Watch Live Telecast, Live Streaming

England vs West Indies 2nd Test: When And Where To Watch Live Telecast, Live Streaming

THE CORONAS RELEASE ‘LIGHT ME UP’ SINGLE