England vs West Indies, 3rd Test: England Made To Wait For Win With Day 4 Washed Out 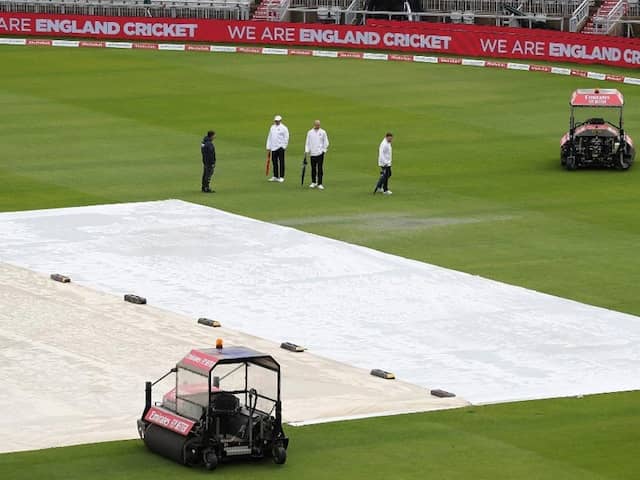 Rain played spoilsport on Day 4 of the 3rd Test between England and West Indies.© AFP


Rain wiped out the fourth day’s play at Old Trafford on Monday to frustrate England’s bid for a series-clinching win over the West Indies and keep Stuart Broad waiting for his 500th Test wicket. Bad weather meant the whole of the penultimate day’s play in the deciding third Test was washed out, with the umpires finally abandoning any hope of action soon after 4:00 pm (1500 GMT). England do, however, still have one day left to press for a win that would see them take the three-match series 2-1.

Broad is just one wicket away from becoming only the seventh bowler to join the “500 club” after taking all six West Indies wickets that fell on Sunday.

The 34-year-old paceman returned first-innings figures of 6-31 as West Indies were bundled out for 197 in reply to England’s 369, which included Broad’s dashing 62.

And after England made 226-2 declared in their second innings, featuring Rory Burns’ 90 and fifties from captain Joe Root and Dom Sibley, there was still time for Broad to strike twice by removing John Campbell and nightwatchman Kemar Roach.

That left Broad, controversially omitted from West Indies’ win in the series opener at Southampton, on 499 Test wickets.

The only bowlers with more than 600 Test wickets are a trio of former spinners — Sri Lanka’s Muttiah Muralitharan (800), Australian Shane Warne (708) and India’s Anil Kumble (619).

The only seamers ahead of Broad are his long-time England new-ball colleague James Anderson (589 wickets) and Australia’s Glenn McGrath (563) and the West Indies’ Courtney Walsh (519), both of whom are retired.

West Indies will resume on 10-2, chasing an unlikely victory target of 399.

No side has made more to win in the fourth innings of an Old Trafford Test than England’s 294-4 against New Zealand in 2008.

West Indies, who hold the Wisden Trophy after a 2-1 win over Root’s men in the Caribbean last year, are bidding for their first Test series success in England since 1988.

ALA.NI Releases New Song and Video “Lament for Emmett Till” Benefitting The Emmett Till Legacy Foundation