England vs West Indies: Ollie Pope Takes One Of The Best Close-In Catches Ever Seen. Watch 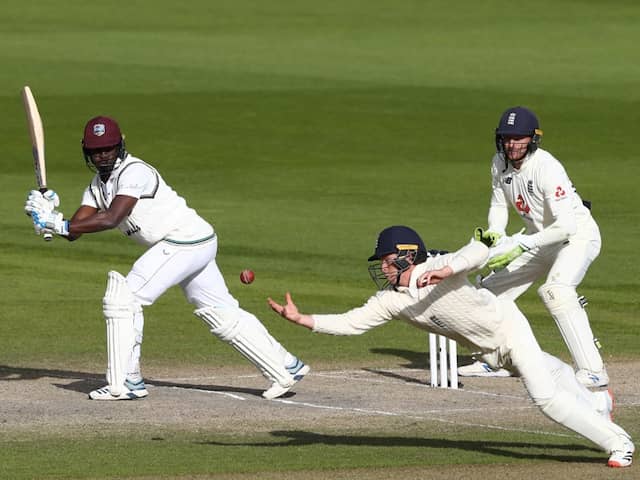 
England suffered a shock defeat in the first Test to the West Indies, but came roaring back in the second to blow the visitors away and level the three-match Test series at 1-1. Ben Stokes was star for England, excelling with both the bat and ball but amid the Stokes show, there was another piece of magic on the field, which for once didn’t involve the all-rounder. Ollie Pope, 22, fielding at short leg, produced one of the best close-in catches ever seen to wrap up the match for England.

With England needing one wicket to win, Kemar Roach flicked a Dom Bess delivery and it seemed to come off the meat of the bat, but Pope showed great reactions to get both hands to the ball. Pope, though, couldn’t hold on and the ball popped up with the Englishman diving full length to complete the catch with one hand on the second attempt.

An outrageous catch to seal the win @OPope32!

The Test, however, belonged to one man, and one man only — Mr. Incredible Ben Stokes as christened by England captain Joe Root.

The all-rounder has already gained heroic status in England following his exploits in the World Cup 2019 but he is continuing to improve and is cementing his name among the greats of the game.

Stokes showcased the multiple facets he brings to the table. He scored a brilliant 176 in the first innings as England declared at 469 for nine, and then followed it up with a 78-run unbeaten blitz to set the West Indies a 312-run target.

Having taken a wicket in the first innings, Stokes capped off a brilliant display by accounting for two crucial wickets in the second innings as the visitors fell short by 113 runs.

The third and final Test of the series is set to start at Old Trafford on Friday.

India’s Current Hockey Teams Are Best In Terms Of Their Fitness And Co-Ordination: Bharat Chetri

Got an old phone lying in the drawer? Just send it by post, in France

Got an old phone lying in the drawer? Just send it by post, in France

Introducing Spun Out; Debut Album Out 8/21