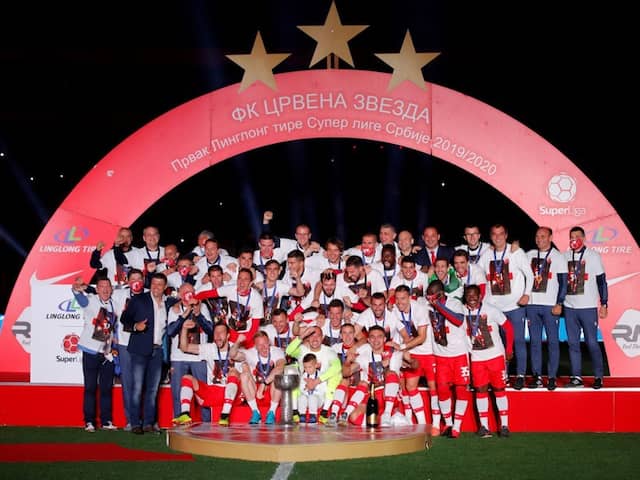 
Five players from Serbian club Red Star Belgrade have tested positive for coronavirus after playing several matches attended by thousands of people, the club said Monday. The announcement came 12 days after Red Star faced city rivals Partizan Belgrade in front of a crowd of around 16,000 people, the largest gathering of that kind in Europe since the beginning of the coronavirus pandemic. The Serbian government has been loosening lockdown rules and earlier this month it announced that open-air gatherings with an unlimited amount of people would be allowed.

But coverage from television channel RTS appeared to show little sign of health guidelines in place at the match with Partizan as well as at other league games.

Following the final match of the season against Proleter on Saturday, Red Star Belgrade celebrated winning the Serbian title with more than 10,000 of their fans.

At least four of the five players did not play in that last match as they had felt coronavirus symptoms ahead of it, the club said.

“The players feel well and are in strict isolation and in permanent contact with the medical team of the club,” Red Star said in a statement.

Two weeks after it declared it was coronavirus-free, Serbia’s neighbour Montenegro last week reported new cases of coronavirus, with authorities blaming citizens who attended the match in Belgrade and brought the virus back over the border.

“It is clear that the departure of our citizens to the football derby played in Belgrade has brought us to the situation we have today,” the head of the main hospital in Montenegro capital Podgorica Jevto Erakovic said on Thursday.

The Serbian league resumed on May 29, initially behind closed doors, before the government further eased restrictions.