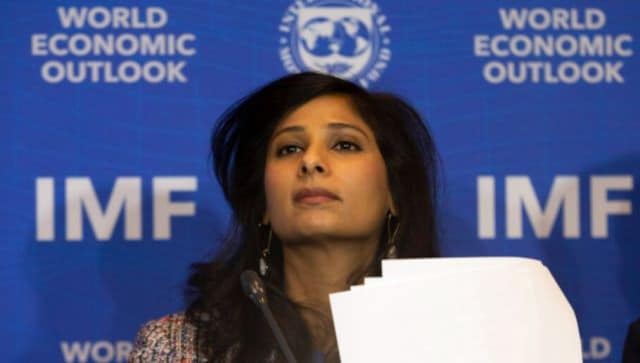 International Monetary Fund’s Chief Economist Gita Gopinath will leave her post in January next year and return to the prestigious Harvard University.

My immense gratitude to all my amazing colleagues at @IMFNews who make working at the IMF truly gratifying. I look forward to continue working with them the next few months before my return to @Harvard https://t.co/llK9q49xtf

Gita’s contribution to the Fund and our membership has been truly remarkable — quite simply, her impact on the IMF’s work has been tremendous, Georgieva said.

“We benefitted immensely from her sharp intellect and deep knowledge of international finance and macroeconomics as we navigate through the worst economic crisis since the Great Depression.”

As Gopinath bids adieu to the IMF, take a look at her career — her achievements and shortcomings at the Fund.

Who is Gita Gopinath?

Before joining the IMF, she was the John Zwaanstra Professor of International Studies and Economics at Harvard University.

Gopinath, who was born in December 1971 to Malayalee parents, completed her schooling in Kolkata and later graduated from Lady Shri Ram College of Commerce in Delhi. She completed her Masters from the Delhi School of Economics and the University of Washington.

In 2001, Gopinath gained her PhD in economics from Princeton University, under the guidance of Kenneth Rogoff, Ben Bernanke and Pierre-Olivier Gourinchas.

In 2005, after being an Assistant Professor at University of Chicago, she joined Harvard University and made history by becoming the third woman to be a tenured professor in the economics department in 2010 and the first Indian since Nobel laureate Amartya Sen to hold that position.

Gopinath also served as an economic adviser to the chief minister of Kerala between 2016 and 2018. The economist was also a member of the Eminent Persons Advisory Group on G-20 Matters for Ministry of Finance in India.

As per the IMF, Gopinath co-authored the Pandemic Paper on how to end the COVID-19

pandemic that set globally endorsed targets for vaccinating the world.

This work led to the creation of the Multilateral Task Force made up of the leadership of the IMF, the World Bank, the World Trade Organisation and the World Health Organisation to help end the pandemic and the establishment of a working group with vaccine manufacturers to identify trade barriers, supply bottlenecks, and accelerate delivery of vaccines to low- and lower-middle income countries, the IMF said in a statement.

She also helped set up a Climate Change team inside the IMF to analyse, among other things, optimal climate mitigation policies.

In March, she had praised India’s vaccination programme and the role the country is playing against the COVID-19

pandemic. “I also want to mention that India really stands out in terms of its vaccine policy. If you look at where exactly is one manufacturing hub for vaccines in the world – that will be India,” Gopinath had said.

The report headed by Gopinath had stated that the “outlook depends not just on the outcome of the battle between the virus and vaccines — it also hinges on how effectively economic policies deployed under high uncertainty can limit lasting damage from this unprecedented crisis”.

Unlike other economists, Gopinath was not afraid of viewing her opinions openly and had harshly criticised Prime Minister Narendra Modi’s 2016 decision of demonetisation.

In an interview to Business Standard on 22 December 2017, she had said that demonetisation should not have been done in India with the level of development that it has.

“No. I don’t think I know a single macroeconomist who thinks that this was a good idea. And, it’s not something I think should be done for a country such as India and the level of development it has,” she was quoted as saying.

During her association with the Kerala government, her policies were called, by some, as neo-liberal.

In fact, as per a MoneyControl report, Marxist economist Prabhat Patnaik had cautioned the Left Deomocratic Front government against Gopinath’s appointment saying that it “should not fall into the trap of new economic development strategies. Such strategies are often anti-labour and against the interests of the common people.”

WHO agrees to independent probe into its coronavirus response, Europe News & Top Stories