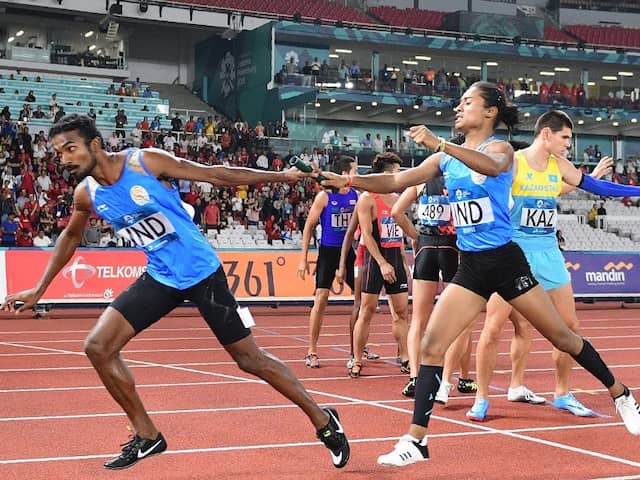 India’s 4x400m mixed relay silver medal in the 2018 Asian Games has been upgraded to gold.© AFP


India’s 4x400m mixed relay silver medal in the 2018 Asian Games has been upgraded to gold after original winners Bahrain were disqualified due to a doping ban. Former world indoor 400m champion Kemi Adekoya lost both the gold medals she won for Bahrain in Jakarta after the Nigerian-born athlete who switched allegiance to the Gulf state was banned for four years by the Athletics Integrity Unit (AIU) last year.

The AIU had said the Nigerian-born Adekoya tested positive for the banned steroid stanozolol.

“The news comes as a fillip to us as we are aiming to build on the Asian Games showing and make a mark at the global level in the Olympic Games in Tokyo next year,” said Sumariwalla.

Kazakhstan claim silver in the mixed relay while China move from fourth to third.

Bahrain’s athletics programme came under further scrutiny in June when Salwa Eid Naser, the 2019 world silver medallist at 400m, was provisionally banned after failing to make herself available for doping tests.

Celebrity Moms Reveal Their Back to School Must-Haves