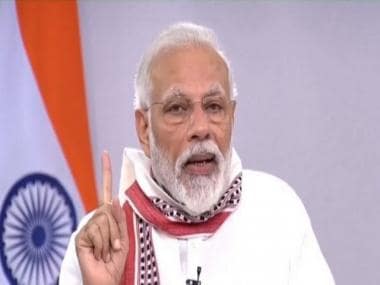 Speaking on a slew of topics from economy, entrepreneurship, manufacturing to medical supplies, Prime Minister Narendra Modi on Tuesday said India will definitely get its economic growth back as the government continues to pursue various reforms.

#WATCH I would rather go beyond ‘Getting Growth Back’ and I would say, “Yes, we will definitely get our growth back”: Prime Minister Narendra Modi https://t.co/66HKx9I6Qu pic.twitter.com/1kmy7EiXzu

Speaking at a video conference to the industry body, Confederation of Indian Industries’ (CII) annual session, he said the government has taken tough steps to fight the coronavirus pandemic and has also taken care of the economy.

“Yes, we will definitely get our growth back,” he asserted.

The Prime Minister said that he has faith in the technology, innovation and intellect of the country which would help the economy revive.

He said he gets the confidence from farmers, small businesses and entrepreneurs for getting the economic growth back.

Noting that strengthening the economy in times of corona is among the government’s highest priorities, he said: “Trust me, getting back growth is not that difficult.

“Corona may have slowed our speed (of growth) but India has now moved ahead from lockdown with the phase one of unlock. Unlock Phase-1 has reopened a large part of the economy,” he said.

He said intent, inclusion, investment, infrastructure and innovation are crucial for India to revert back to a high-growth trajectory.

“For us, reforms are not any random or scattered decisions. For us reforms are systemic, planned, integrated, inter-connected and futuristic process,” he said.

He further noted that “for us reforms mean courage to take decisions and taking them to logical conclusion.”

Speaking of the Aatmanirbhar Bharat economic package announced by the Finance Minister Nirmala Sitharaman in May to help revive the economy post the corona crisis, he said that the package would work as fuel for the growth of the MSME sector.

Labour reforms are being done to support workers and increase jobs and private participation in strategic sectors is becoming a realit, he said. The the government has allowed private players in space and atomic energy research segments.

Modi also said that with the latest decision to amend the APMC Act, the farmers will now be free from the dependence on middle-men and will be able to sell their produce anywhere they want to.

“Post-independence laws made farmers dependent on middle-men. They will now get their rights post amendment to APMC Act,” he said.

Centre will give govt employees cash vouchers instead of LTC to stimulate economy, says Nirmala Sitharaman