Harbhajan Singh celebrated International Yoga Day on Sunday and shared a picture of him, his wife Geeta Basra and daughter Hinaya doing yoga. “YOGA The answer for everything #yogaday should be everyday,” Harbhajan Singh captioned the photo on Instagram. While many of his fans flooded the post with heartwarming messages, Team India vice-captain Rohit Sharma stood out with a hilarious comment. “Saas chodo bhaju pa (Breathe out),” Rohit Sharma commented on the post, teasing the veteran India spinner for his facial expression.

Actress Geeta Basra shared the video of a complete yoga session with her husband.

“Happy #yogaday .. the best thing to have been instilled in my life.. it’s a way of life,” she wrote along with the video on Instagram.

Indian opener Shikhar Dhawan’s wife Aesha joined in with a comment: “This is incredible. Love it guys”. 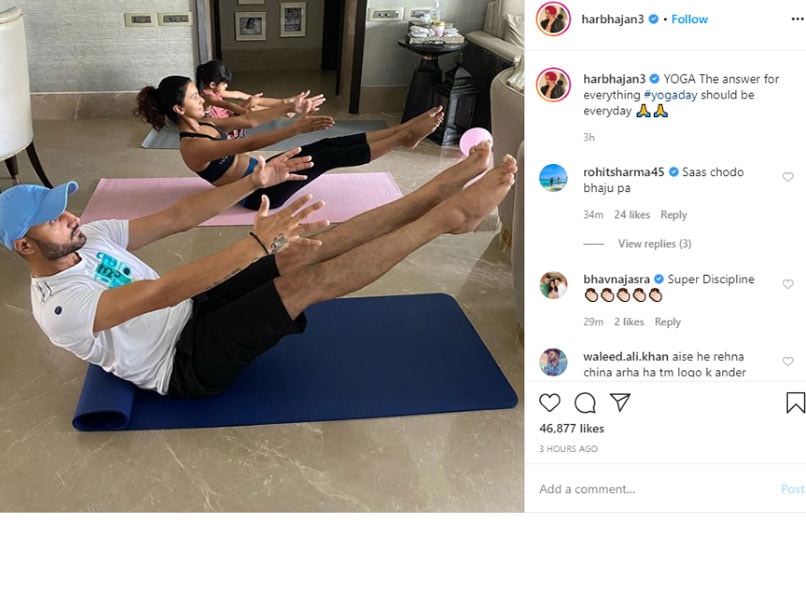 International Yoga Day has been celebrated annually on 21 June since 2015, following its inception in the United Nations General Assembly in 2014.

Recently talking about his exit from cricket, Harbhajan, who has 417 Test wickets, said things could have been different if someone talked to him before dropping him from the side.

“I will always regret and things could have been handled better. Playing 100 Tests is a very big thing for any player and I was lucky enough that I’m one of them. I agree that my performance may dip a bit or I was not performing as expected but it could have been handled better. Nobody came to talk to me. I returned from West Indies with 400 scalps and dropped from the side and never picked again in the Test cricket,” Harbhajan said on the official YouTube channel of former cricketer Aakash Chopra.

Harbhajan’s last game for India was a T20I against UAE in the 2016 Asia Cup. Since then, he has not been picked in the Indian side.

India Has Some Of The Best Brains In Hockey: Graham Reid

“Don’t Bother What The Shots Look Like”: What Rahul Dravid Advised Ajinkya Rahane For T20s