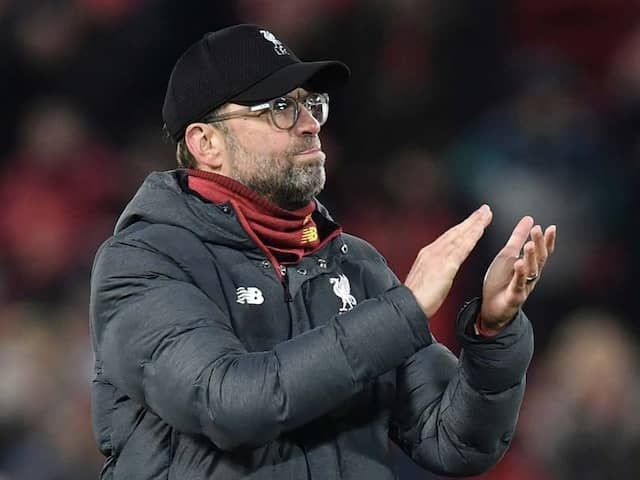 Jurgen Klopp told Liverpool fans that they are “80 or 90 per cent of the fuel in our tanks”.© AFP


Jurgen Klopp has told Liverpool fans to cheer his team to Premier League glory from their homes as the runaway leaders prepare for the season to restart. Klopp’s side were two victories from winning Liverpool’s first English title in 30 years when the coronavirus pandemic forced the postponement of the season in March. Liverpool will finally be back in action on Sunday when they face Merseyside rivals Everton at Goodison Park in a match that could serve as their title clincher.

If second-placed Manchester City lose at home to Arsenal on Wednesday, then Liverpool need only to beat Everton to secure the club’s 19th league title with eight games to spare.

Aware that fans will be eager to celebrate their long-awaited triumph, Liverpool boss Klopp has urged them not to break social-distancing rules by gathering outside Goodison Park or Anfield.

“It’s still football and it’s still for you. That means we will be in the stadium, and you will be at home,” Klopp said in a video message on Liverpool’s website on Tuesday.

“We really will use that, and we will need that. But, the final message: stay safe, support us from home.”

Klopp, who celebrated his 53rd birthday on Tuesday, admitted the three-month lay-off had been taxing as he waited to discover if his side would get the chance to win their first league crown since 1990.

“There were times when we didn’t know exactly if we would play again this season,” he said.

“There were rumours about ‘null and void’, ‘points per game’ and all that stuff. And now we stand here, and in a couple of days the league will start again.

“Because we behaved really responsibly. We did the things we had to do because we wanted to save our loved ones and all the others as well.”