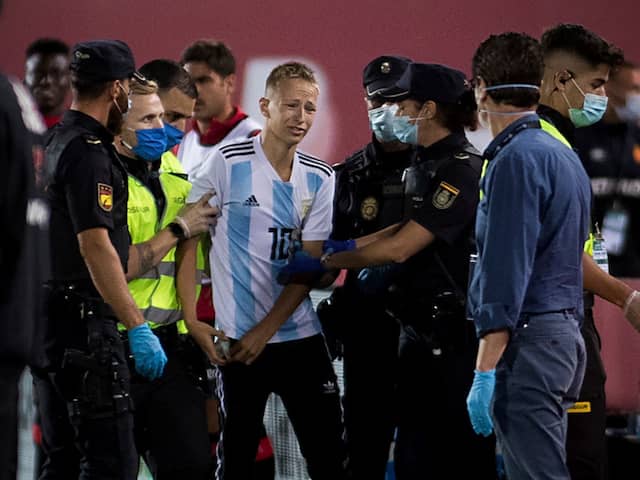 A fan wearing an Argentina shirt with Lionel Messi’s name on the back entered the pitch on Saturday.© AFP


La Liga have said they will launch criminal proceedings against the pitch invader who ran on during Barcelona’s match against Real Mallorca on Saturday, which was supposed to be behind closed doors. In the 52nd minute of Barca’s 4-0 win at Son Moix, a man wearing an Argentina shirt with Lionel Messi’s name on the back entered the pitch and posed for a picture on his phone near Jordi Alba.

He was not wearing either a mask or gloves and was chased before being caught and escorted away by security.

La Liga has imposed a strict medical protocol for matches, which resumed in the top flight on Thursday with Sevilla’s victory over Real Betis.

Fewer than 300 people are allowed into stadiums and games are closed to the public.

“La Liga will file criminal actions against the invader who entered the pitch without permission and broke the protocols established in current health legislation and disobeyed the orders of private security personnel,” a statement from the league said. “His actions constitute a crime.”

It added: “La Liga wants to express its absolute condemnation of this type of conduct that jeopardises the health of others and the integrity of the competition.”

One small step for iPad, a giant leap for Apple