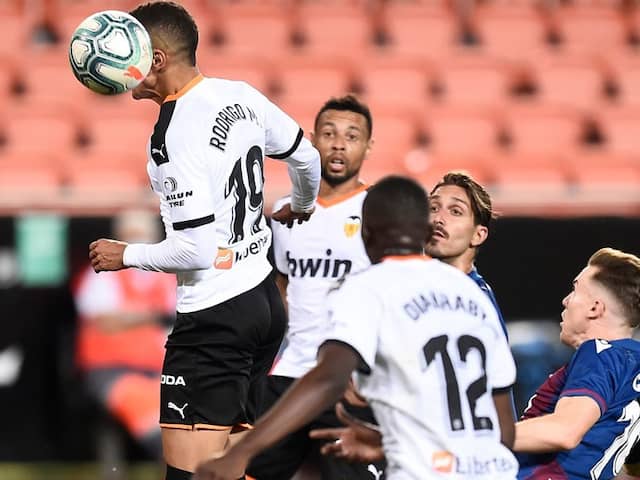 Levante scored a 98th-minute penalty on Friday to snatch a 1-1 draw against Valencia.© AFP


Ten-man Levante scored a 98th-minute penalty on Friday to snatch a 1-1 draw against Valencia as La Liga completed its second day of fixtures since its return from the coronavirus suspension. It was a miserable night for the league’s top-four hopefuls as Granada also came from behind to beat Getafe 2-1, meaning Atletico Madrid and Real Sociedad have the chance to capitalise on Sunday. Valencia looked to have grabbed a later winner themselves at an empty Mestalla when Rodrigo Moreno diverted in at the near post in the 89th minute.

But Mouctar Diakhaby pulled down Ruben Vezo deep into injury-time and Gonzalo Melero made no mistake, equalising for Levante from the spot.

The visitors also had Roger Marti sent off for a second yellow card in the 74th minute.

Granada, also playing behind closed doors at Los Carmenes, scored in the 70th and 79th minutes as a Djene Dakonam own-goal and Carlos Fernandez’s finish wiped out Getafe’s lead, given to them in the first half by David Timor.

Defeat means Getafe stay fifth, handing Atletico the chance to overtake them if they can win away at Athletic Bilbao on Sunday.

Valencia remain seventh, three points of adrift of Real Sociedad, who are at home on Sunday to Osasuna.

Granada, who were only promoted last season, move up to eighth, with the Europa League places now in sight while Levante edge up to 12th.

La Liga became the second of Europe’s five major leagues after the German Bundesliga to resume on Thursday, when Sevilla overcame Real Betis 2-0 in the division’s first match since March 10.

League leaders Barcelona play away at Real Mallorca on Saturday before Real Madrid, two points behind in second, return at home to Eibar on Sunday.