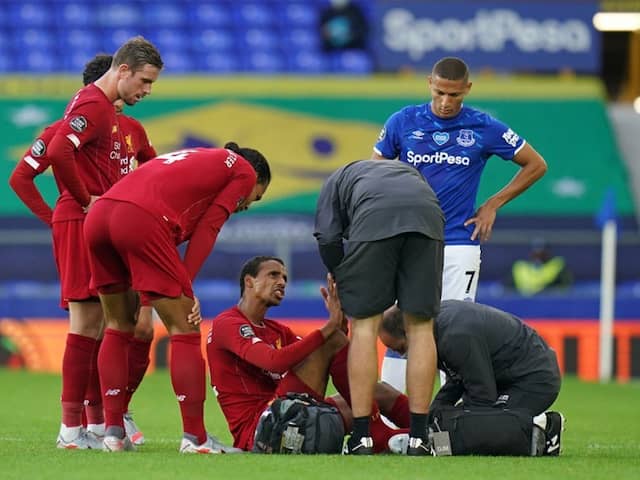 Joel Matip will miss the remainder of the Premier League season after picking up a foot injury.© AFP


Liverpool’s Joel Matip on Tuesday revealed that he would be missing the remaining 2019-20 season due to a foot injury. The centre-back had sustained the injury during the goalless draw with Everton at Goodison Park on June 21 as Liverpool restarted their Premier League campaign. Matip then sat out of the Reds’ 4-0 win over Crystal Palace at Anfield and now he feels that he is likely to be absent from the newly-crowned champions’ remaining seven fixtures. “This season I will be not back on the pitch but for next season, I hope I’m going to be quite early a direct help for the team,” the official website of Liverpool quoted Matip as saying.

Last week, Liverpool managed to secure the Premier League title after a span of 30 years.

The side achieved the feat as Chelsea defeated Manchester City 2-1 on Thursday.

With this, Liverpool achieved an unassailable 23-point lead at the top.

Manager Jurgen Klopp has guided Liverpool to domestic, continental, and global crowns over the course of the last 12 months.

Liverpool will next take on Manchester City in the Premier League on Thursday, July 2.

[OUR HOUSE] ANNOUNCES DIGITAL FESTIVAL “GIG IT BACK” JUNE 26+27th AS IT’S FINAL STREAM, CELEBRATING 1,500 HOURS OF STREAMING & PAID GIGS DURING THE LOCKDOWN

Australia Revert To Using Kookaburra Balls Only In Domestic Cricket