LPG gets costlier from today: Price of cylinder goes up by Rs 37 in metros; jet fuel price hiked 50% 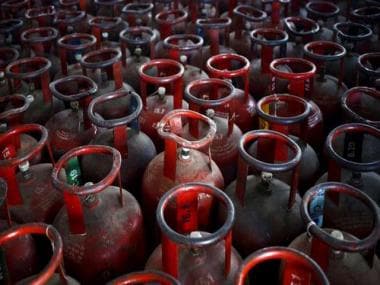 The Oil Marketing Companies (OMCs) have hiked the price of Liquified petroleum gas (LPG) cylinder rates effective from today (1 June) to Rs 37 for a cylinder of non-subsidised LPG in metro cities.

The government currently subsidises 12 cylinders of 14.2 kilograms each per household in a year.

Additional purchases have to be made at the market price.

In a statement on Sunday, Indian Oil Corp said that the retail selling price of LPG in Delhi market for the month of May 2020 was reduced from Rs 744 to Rs 581.50 per cylinder for all consumers in line with drop in International prices.

“For the month of June, there has been an increase in International prices of LPG. Due to increase in the prices in international market, the RSP of LPG in Delhi market will be increased by Rs 11.50 per cylinder,” it said.

“Just when we were just beginning to take to the skies again, there has been a steep hike of 48%. With poor aircraft occupancy, higher fuel price and weaker rupee, airlines will need to closely examine how many planes should they be flying to keep costs in check as revenue stream is very weak,” an official told The Times of India.

Coronavirus Lockdown: Hotel stocks rally up to 19% as govt lifts curbs on operations from 8 June

“Respect Him But Don’t Fear Him”: Young Pakistan Pacer On Bowling To Virat Kohli

"Respect Him But Don't Fear Him": Young Pakistan Pacer On Bowling To Virat Kohli

The Killers New Album ‘Imploding The Mirage’ Out 8/21, New Video For “My Own Soul’s Warning Out Now