The five experts —TV Somanatham Tarun Bajaj, Debashish Panda, Ajay Seth and Tuhin Kanta Pandey — have played a key role in deciding how the amount during each fiscal is allocated to different sectors. They have been operative in Budget 2022 as well 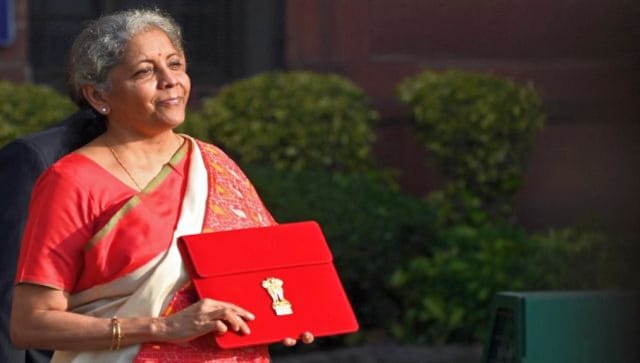 File image of Finance Minister Nirmala Sitharaman posing for pictures as she leaves the finance ministry to present the annual Budget in Parliament. AFP

There are just moments to count before Finance Minster Nirmala Sitharaman presents the Union Budget 2022.

The Budget 2022 will be presented by Sitharaman a day after the budget session kicked off at the Parliament with the President’s speech. During this time, the Economic Survey was also presented at the Parliament, which pegged India’s GDP growth at 9.2 per cent in FY21-22.

Apart from Nirmala Sitharaman, the Budget is heavily dependent on her A-team.

Sitharaman’s team, comprising five high profile officials — TV Somanatham, Tarun Bajaj, Debashish Panda, Ajay Seth and Tuhin Kanta Pandey — has a key role in deciding how the amount during each fiscal is allocated to different sectors. They have been operative in Budget 2022 as well.

Catch all the live updates of the Budget HERE

Let us know about Finance Minister Nirmala Sitharaman’s team that has a key role in designing the Budget 2022:

TV Somanathan: The 1987 IAS officer from the Tamil Nadu cadre previously served as a joint secretary at the Prime Minister’s Office in 2015. He is the senior most official among the five, being designated as the finance secretary, and has been pushing ministries to spend more on of their capital expenditure to ensure growth amid the pandemic-accelerated economic strains in the country. It is to be seen how Somanathan figures out how the capital expenditure will be spent this fiscal after Union Budget 2022.

Tarun Bajaj: Revenue secretary of the finance ministry, Tarun Bajaj is another recruit from the Prime Minister’s Office. His role in the finance ministry is to ensure realistic tax targets and this year, he plans to exceed tax collections. Bajaj played a key role in facilitating healthcare packages during the pandemic. During the Budget 2022, he is expected to ease tax compliances and announce packages for pandemic-hit businesses and sectors.

Ajay Seth: Ajay Seth was the managing director of Bangalore Metro before joining as the economic affairs secretary in April 2021. The rather shy bureaucrat is in charge of drafting all the Budget speeches of Sitharaman, with Somanathan by his side. He is also behind drafting the speech of Budget 2022. His department is also the main department for capital market, investment, and infra-related policies. He is expected to allocate large amounts in big projects to bring in revenues and create jobs.

Debashish Panda: Also a 1987 batch IAS officer, Debashish Panda plays a key role in the revival of public sector offices, as the Department of Financial Services head. Thanks to him, banks have performed well despite the pandemic, and Panda is expected to facilitate this during the Budget.

Petrol and diesel prices; here’s what you need to pay in your city today on 1 February 2022