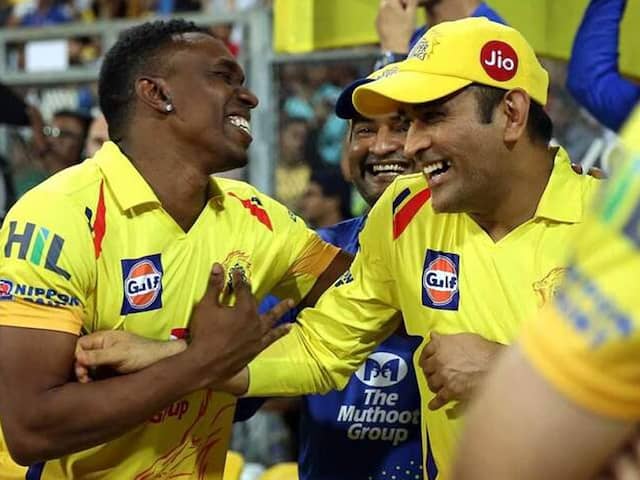 
MS Dhoni will celebrate his 39th birthday on July 7 and a week before the celebration, West Indies cricketer Dwayne Bravo has dropped a teaser of his latest song dedicated to India’s World Cup-winning captain. Dwayne Bravo, who plays under the captaincy of MS Dhoni for Chennai Super Kings (CSK), took to Instagram to share the teaser of the song adding that the complete song will be released soon. “Are you ready for July 7th!! @mahi7781 birthday we going to be celebrating his birthday in style with this special track from the Champion team!! @djanamusic @ultrasimmo @collegeboyjesse @arielle.alexa @dexterrthomas guys don’t forget to tag us an let us see your helicopter dance!! #7 #Helicopter,” he captioned the video on Instagram.

“MS Dhoni, number 7, MS Dhoni, number 7. 2007 T20 Champion, 2011 became the world champion, first captain to win every trophy for his nation, now everybody do the helicopter celebration,” are the lyrics of the song penned and sung by Bravo in the Instagram video.

Dhoni last played for India in their World Cup semi-final loss to New Zealand in Manchester.

He would be seen leading CSK in the 2020 edition of the Indian Premier League (IPL) when and if it starts. The cash-rich league, scheduled to start on March 29, has been postponed indefinitely due to the coronavirus pandemic.

Dhoni has been dropped from the central contracts list but when the camp happens, a few players from outside the pool will also be there.

Former chairman of selectors MSK Prasad told PTI that if there is a T20 World Cup happening, then possibly Dhoni can be called but if its a case of playing bilaterals, then the selection committee might think differently.

“I don’t know whether T20 World Cup is happening or not. If it is happening and you are just looking at the camp as a pre-cursor to the tournament, then MS should definitely be there. If it’s a case of bilaterals, then you already have KL Rahul, Rishabh Pant and Sanju Samson,” Prasad said.

Superlover will get dance floors shaking with ‘All Shook Up’