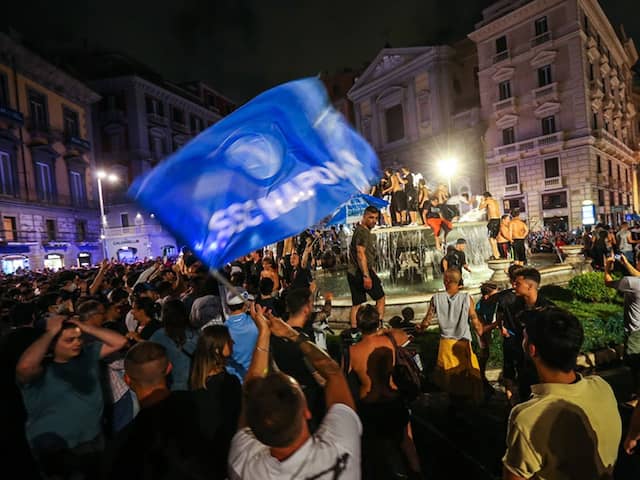 Most of the celebrations were in Piazza Trieste e Trento, in the city’s historic centre.© AFP


Thousands of Napoli fans swarmed onto the streets of Naples late on Wednesday to wildly celebrate their team’s first trophy in six years after a dramatic Italian Cup penalty-shootout victory over Juventus. The match in Rome’s Stadio Olimpico was played behind closed doors because of the strict post-coronavirus health protocol. But in Naples, an estimated 5,000 fans celebrated in the city’s historical centre after the 4-2 penalty win after the match against the Juventus of their former coach Maurizio Sarri ended 0-0. Parades of cars and scooters began at the final whistle and gatherings took place in different parts of the city, with flares and fireworks lit and fans brandishing scarves and banners in praise of Napoli or mocking Juventus.

Most of the celebrations were in Piazza Trieste e Trento, in the city’s historic centre, and the traditional meeting place for club tifosi on victory days.

In the midst of the flags, the horns and the songs, dozens of people threw themselves into the Artichoke fountain, in the centre of the piazza.

Napoli had not won a trophy since 2014, the year they won both the Italian Cup and Super Cup.

They have won Serie A twice, back in the days of Argentine great Diego Maradona in 1987 and 1990.

The cup triumph was their sixth in the competition against a team who have won a record 13 and are coached by Sarri, who acrimoniously left Napoli for Chelsea in 2018 before joining the Turin giants this season.

Napoli have been reborn under coach Gennaro Gattuso who took over from Carlo Ancelotti in December.

They are sixth in the league table with Serie A returning this weekend after a three-month absence due to the coronavirus.

Glee Fans Are Seriously Disturbed By This Scene Filled With Dummies