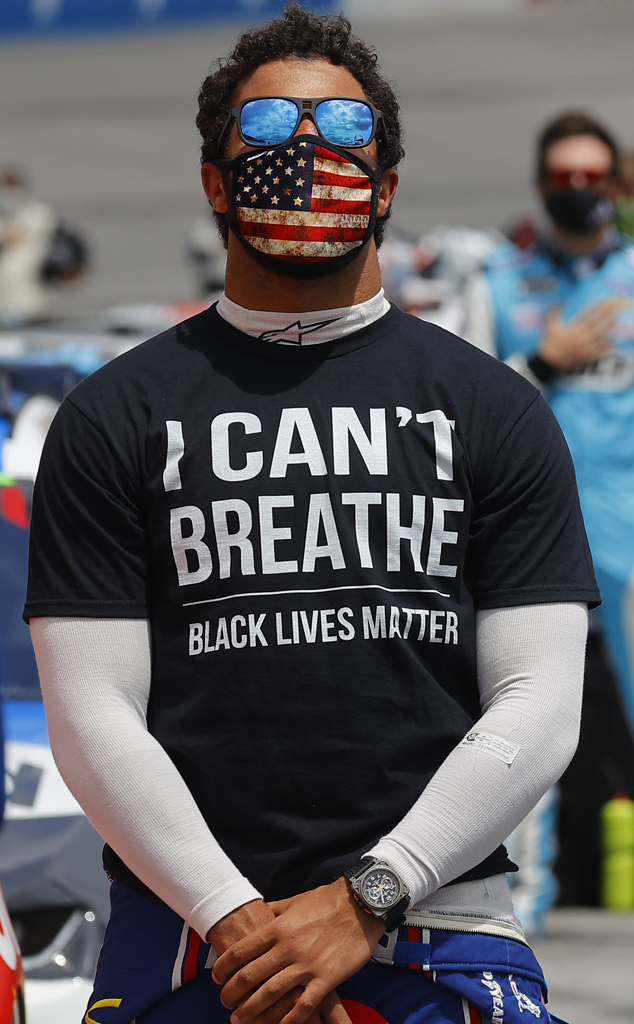 Bubba Wallace is calling “to get rid of all confederate flags” at the race tracks.

During a recent CNN interview with Don Lemon, the 26-year-old NASCAR driver said this should be a “next step.”

“No one should feel uncomfortable when they come to a NASCAR race. So, it starts with confederate flags,” Wallace said on Monday. “Get them out of here. They have no place for them.”

Wallace said he initially wasn’t bothered by seeing the confederate flag at the races. But after educating himself, he learned “people feel uncomfortable with that.”

“There’s going to be a lot of angry people that carry those flags proudly, but it’s time for change,” he said. “We have to change that, and I encourage NASCAR and we will have those conversations to remove those flags.

Lemon then asked Wallace how he planned to address fans who disagree with him.

“These conversations are being had—talking to drivers, getting their mindsets and hearing their stories as well… Like I said, that action there starts with removing the confederate flags and standing behind that 100 percent,” Wallace said. “We ask nicely the first time. If they don’t agree, then you have a nice day and get on back on the road wherever you came from. It should not be allowed. We should not be able to have an argument over that. It’s a thick line that we cannot cross anymore.”

Wallace also said “that’s just the start of what we need to do.”

“Do we have an end goal? I don’t know if the nation has an end goal,” he said. “Obviously, our end goal is to get racial inequality out of here and treat everybody equally—that is our end goal. But as far as the process, we don’t have a timeframe on that.”

NASCAR drivers have joined the growing list of athletes and sports leagues throwing their support behind the nationwide protests against police brutality.

“We are trying to deliver the message across, listen and learn,” says NASCAR driver Bubba Wallace. https://t.co/dP88eNKB2i pic.twitter.com/vSsu4UrRUM

Over the weekend, Wallace attended the NASCAR Cup Series Folds of Honor QuikTrip 500 at Atlanta Motor Speedway and wore a shirt featuring the words “I can’t breathe”—which George Floyd repeatedly said before he died at the hands of police.

That same weekend, NASCAR released a video in which several drivers, including Wallace, spoke about driving change.

The organization also released a statement about standing against racism.

“The NASCAR family, like so many others, is hurt and angered by the immensely troubling events that have taken place across our country in recent weeks,” the statement read. “For us to heal and move forward as a nation, we all need to listen more and be united in the stand against racism, hatred, senseless violence and loss of life. And we must all hold ourselves accountable to driving positive change. While our sport has made progress over the years, there remains much work to be done and we fully embrace our responsibility  to help bridge the racial divide that continues to exist in our country. We must do better and our commitment to promoting equality and inclusion continues and will never waiver.”