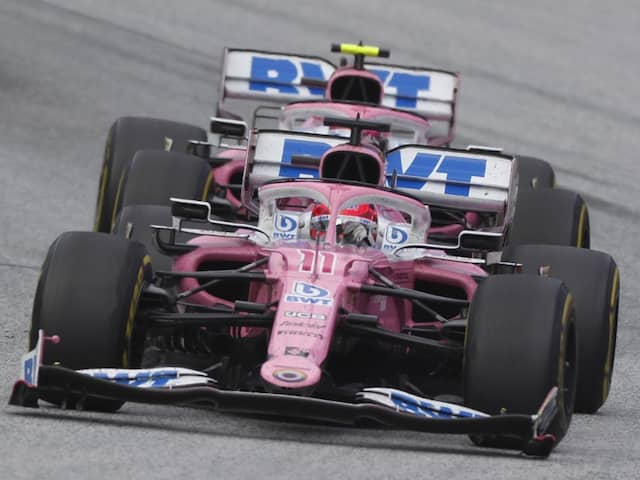 Racing Point are powered by Mercedes engines and their base at Silverstone is close to the Mercedes team.© AFP


Red Bull chief Christian Horner said “everybody” should be concerned about the pace of Racing Point this season after Renault protested the legality of their car on Sunday. Renault lodged a formal protest in the aftermath of Lewis Hamilton’s victory in the Styrian Grand Prix, a race that saw Sergio Perez storm from 17th on the grid to sixth in his Racing Point. The Renault protest claims that Racing Point has breached Formula One’s rules by building a car that is not original in design of specific ‘Listed Parts’.

The race stewards deemed the protest to be admissible and the sport’s ruling body, the International Motoring Federation (FIA), impounded Racing Point’s front and rear brake ducts and requested Mercedes provide them with the same parts from its 2019 car.

Red Bull team boss Horner said: “I think everybody should be worried by the Racing Point. Perez was quicker than (Valtteri) Bottas’ Mercedes at one point of the race.

“And, bearing in mind that Bottas tyres were within one lap of age to the racing Point, Perez was three or four-tenths quicker. So, that was very impressive pace that they showed.”

Perez team-mate Lance Stroll came home seventh and said he felt his team had the ‘second quickest car’ in the race.

“We had debatably the second quickest car, maybe third, but we were definitely quicker than Renault, McLaren and a lot of other competitors.”

Racing Point are powered by Mercedes engines and their base at Silverstone is close to the Mercedes team. They finished seventh in last year’s constructors’ championship, but are in a period of evolution after new owner Lawrence Stroll took over in 2018.

Similarities between the Racing Point and last year’s Mercedes grabbed attention during pre-season testing and the team has not shied from conceding they took inspiration from it.

The said they studied the car in detail from photographs, but did nothing that was illegal.

Meghan Markle and Her Friends Felt “Silenced” By the Royal Family: Court Documents