The joint venture, named TA’ZIZ EDC & PVC, will be a world-scale chemical production partnership at the TA’ZIZ Industrial Chemicals Zone in Ruwais 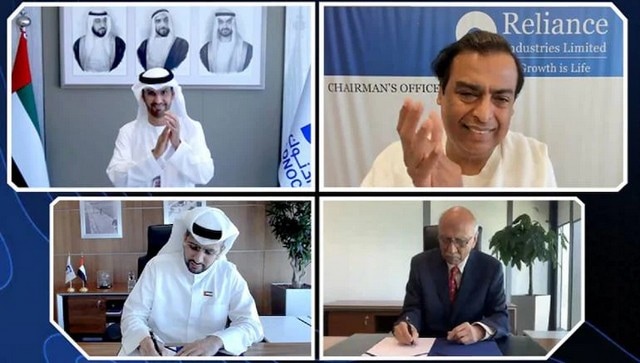 “The new joint-venture will construct and operate a Chlor-Alkali, Ethylene Dichloride (EDC) and Polyvinyl Chloride (PVC) production facility, with an investment of more than $2 billion,” RIL said in a statement.

The joint venture, named ‘TA’ZIZ EDC & PVC’, will be a “world-scale chemical production partnership” at the TA’ZIZ Industrial Chemicals Zone in Ruwais.

The project is expected to support TA’ZIZ mission to diversify the UAE’s economy and accelerate industrial development, as it would enable local supply chains through the production of new chemicals in the country.

The signing of the joint venture terms, which are subject to regulatory approvals, was witnessed by UAE Industry Minister Dr Sultan Ahmed Al Jaber, who is also the ADNOC Managing Director and Group CEO; and RIL chairman and MD Mukesh Ambani.

“This strategic partnership with Reliance Industries builds on the strong and deep-rooted bilateral ties between the UAE and India and highlights the attractive and compelling value proposition offered by TA’ZIZ as we grow a globally competitive industrial ecosystem,” Dr Al Jaber said.

“We are delighted to partner with Reliance Industries in this new joint venture which will manufacture critical industrial raw materials for the first time in the UAE, supporting our national strategy to empower the industrial sector to become the driving force of a truly dynamic economy over the next 50 years,” the minister added.

Ambani, while commenting on the launch of the joint venture, said it will cement the long-standing and valued relationship between India and the UAE.

“We are happy that we will be setting up the first projects in the vinyl chain in the UAE at TA’ZIZ Industrial Chemicals Zone, which is being developed into a global hub for chemicals,” the RIL chief said.

“India’s need for PVC to propel its growth, and the value from the abundantly available feedstock in the UAE, provides a win-win partnership for both companies. Close cooperation in the region based on shared objectives is key as we optimise resources and work together to enrich the lives of our citizens.,” Ambani added.

The chemicals that will be produced by the new venture have a wide range of industrial applications, enabling local supply chains and meeting growing demand in key export markets.

Chlor-Alkali enables the production of caustic soda, crucial to the alumina refining process. EDC is used in the production of PVC, which is used to manufacture a wide range of industrial and consumer products including pipes, windows fittings, cables, films and flooring.

The production of Chlor-Alkali, EDC, and PVC will create opportunities for export to target markets in Southeast Asia and Africa, as well as providing local industry with a source of critical raw materials manufactured in the UAE for the first time, strengthening in-country value.

Petrol and diesel prices; here’s what you need to pay in your city today on 08 December 2021

Petrol and diesel prices; here's what you need to pay in your city today on 08 December 2021