Retail inflation in India declines to 6.93% in November on softening food prices

The RBI, which mainly factors in retail inflation while arriving at key policy rates, has been mandated by the government to keep inflation at four percent 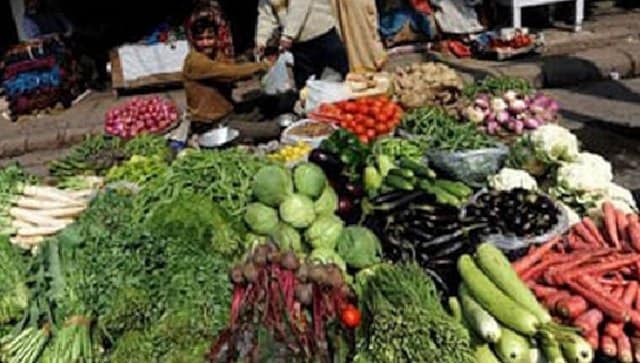 New Delhi: Softening prices of food items like cereals, fruits and milk pulled down retail inflation to 6.93 percent in November, though it remained above the comfort level of the Reserve Bank of India.  Retail inflation based on the Consumer Price Index (CPI) stood at 7.61 percent in October and 7.27 percent in September.

According to data released by the National Statistical Office (NSO) on Monday, inflation in the food basket was 9.43 percent in November, down from 11 percent in the previous month.

Inflation in the ‘cereals and products’ category reduced to 2.32 percent from 3.39 percent in October.  The rate of price rise in ‘meat and fish’ segment was 16.67 percent in November, as compared to 18.7 percent in the previous month.

Similarly, inflation in vegetables was lower at 15.63 percent from 22.51 percent.  Inflation in fruits and ‘milk and products’ was also lower over October.  The rate of price rise in the ‘fuel and light’ segment too moderated to 1.9 percent as against 2.28 percent in October.

The RBI, which mainly factors in retail inflation while arriving at key policy rates, has been mandated by the government to keep inflation at four percent (+, – two percent).

The central bank had maintained status quo in the policy rate earlier this month due to high inflation.

Commenting on the data, Sachin Chhabra, Founder of B2B grocery business Peel-Works, said it was heartening to note that the inflation subsided in November, riding primarily on softer food prices. “We expect inflationary pressure to subside even further in Q4 of the current fiscal. This will provide elbow room to the RBI to continue its accommodative stance, which is critical for the sustained revival of demand,” he added.

India Ratings and Research (Ind-Ra) expects the retail inflation to decline to 5.5 percent to 6 percent range in the fourth quarter of the fiscal due to the cooling-off of food prices.

The NSO data further revealed that retail inflation was 7.2 percent in rural India and 6.73 per cent in urban areas, taking the combined CPI-based inflation to 6.93 percent.

Aditi Nayar, principal economist, ICRA said, “The headline CPI inflation for November 2020 printed appreciably lower than our expectations, benefiting from stable vegetable prices at the retail level. While this provides welcome relief, it is unlikely to prove adequate for any imminent rate easing.”

The price data are collected from representative and selected 1,114 urban markets and 1,181 villages covering all states/union territories through personal visits by field staff of Field Operations Division of the NSO on a weekly roster.

During November 2020, NSO collected prices from 98.8 percent villages and 98.6 percent urban markets while the market-wise prices reported therein were 87 percent for rural and 91.1 percent for urban.