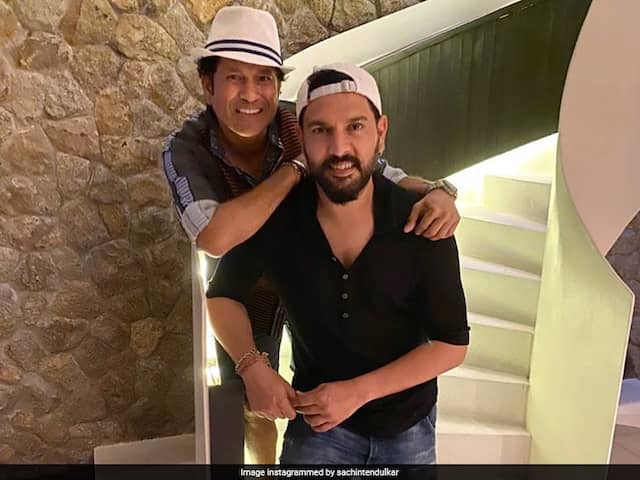 Sachin Tendulkar and Yuvraj Singh were teammates for over a decade.© Instagram


On the one-year anniversary of India’s World Cup-winning hero Yuvraj Singh’s retirement from cricket, legendary batsman Sachin Tendulkar took to social media to post an emotional tribute for the stylish left-hander. Tendulkar also wrote about his first memory of Yuvraj Singh. “Yuvi, the first glimpse the world got of you may have been in the Champions Trophy in 2000 but my first memory of you was during the Chennai camp,” Tendulkar wrote as his caption, sharing a picture on Instagram along with Yuvraj.

“I couldn’t help but notice how athletic & deceptively quick you were at point,” Tendulkar added.

“What I also realised that you had a wonderful 6 hitting ability & it was evident you could clear any ground in the world with ease,” he wrote.

“We’ve shared so many memorable moments playing for India together and it was an absolute joy to have you as a teammate,” Tendulkar added.

“God Bless and keep inspiring the younger generation,” he signed off.

Yuvraj Singh enjoyed a stellar career for India, especially in the shorter formats of the game. The hard-hitting batsman made his ODI debut for India in 2000 and shot to fame with a brilliant half-century in the famous NatWest series final against England, as he helped India chase down a target of 326 from a difficult position.

He became a mainstay in the team and played a crucial role in both India’s World Cup triumphs – the 2007 T20 World Cup as well as the 2011 World Cup.

Such is his cult status, that the hashtag “#MissYouYuvi” trended on Wednesday.

Better than sibling, but not an outright choice

Better than sibling, but not an outright choice

Keke Palmer Explains Why Recent Protest Had a Different Energy