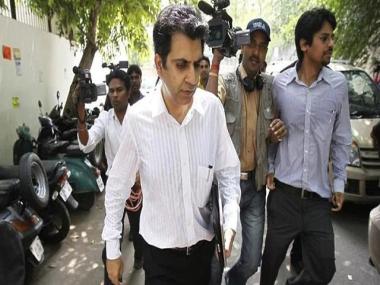 Sanjay Chandra has been in jail for the last three years over charges related to financial fraud and siphoning off of investors’ money.

Supreme Court has granted one-month-long interim bail to Unitech promoter Sanjay Chandra who has been in jail for the last three years over charges related to financial fraud and siphoning off of investors’ money.

Sanjay was granted bail on humanitarian grounds after the court was informed that both his aged parents have tested positive for coronavirus and were seriously ill. However, the apex court refused to allow any such relief to Sanjay’s younger brother Ajay, also in jail on similar charges, Live Law reported. Both brothers had applied for bail, informing the court that their father, 78, was admitted in intensive care unit due to COVID-19 and related health complications, while their mother was also unwell.

Sanjay and Ajay were both managing director of the now beleaguered realestate firm Unitech Ltd, founded by their father Ramesh Chandra in 1971. The brothers were jailed  after the company defaulted on giving possession of flats to its homebuyers on time, and after forensic audits of the company’s books last year showed that more than 50 percent of the money deposited by homebuyers and financial institutions had been siphoned off, which resulted in a delay in completion of projects, NDTV reported.

The auditors had submitted their report which said that Unitech Ltd received around Rs 14,270 crore from 29,800 homebuyers mostly between 2006-2014 and around Rs 1,805 crore from six financial institutions for the construction of 74 projects.The audit revealed that around Rs 5,063 crore of homebuyers’ money and around Rs 763 crore of fund received from financial institutions were not utilised by the company and high value investments were made off-shore tax-haven countries between 2007-2010.

Earlier this year, the Supreme Court allowed the Centre to take total management control of the embattled realty firm and appoint a new board of nominee directors. The decision was made to benefit over 12,000 hassled homebuyers of Unitech.