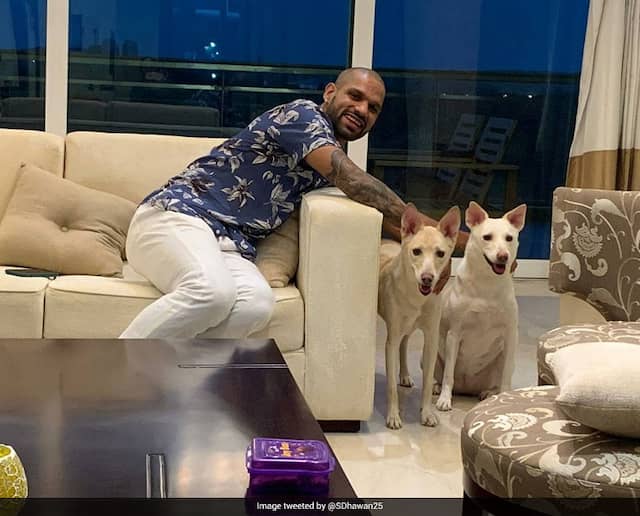 
Shikhar Dhawan on Friday took to Twitter to announce that he has adopted two “cuties”. Sharing the news on the micro-blogging site, Dhawan  posted a couple of pictures posing with his two “new family members”, with his son Zoravar also sitting beside him in one of the pictures. In his post, the left-handed opener also revealed the names of the two latest additions to his family. “Adopted these cuties today. Chloe and Valentine our new family members #desidogs,” Dhawan tweeted.

Mitchell McClenaghan, who plays for Mumbai Indians in the IPL, was among the first people to comment on Dhawan’s post as he wrote: “Nice”.

Like many of his teammates Dhawan has become quite active on various social media platforms. In addition to taking part in various Instagram live sessions, Dhawan doesn’t shy away from pulling legs of his fellow teammates.

Every now and then, Dhawan comes up with a hilarious reply on his fellow teammates’ social media posts, leaving his followers in splits.

“Never too late to try your hand at learning something new. Chef duties at the Pandya household. Swipe for the dish. PS dish is cheese butter masala,” the Indian all-rounder had captioned his post.

For Dhawan, IPL was of much more significance than other players as he was coming off an injury break and he would have been eyeing to use the cash-rich league to prove his match-fitness and strengthen his case to make a comeback into the national team.

However, with the 13th edition of IPL postponed indefinitely due to the coronavirus pandemic, Dhawan is among many top international cricketers who are left with no choice but to spend time at home with their loved ones and now he even has two more “cuties” to give him company.