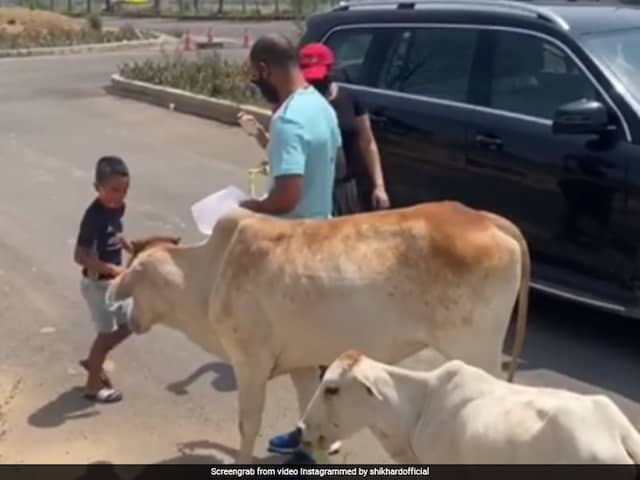 
Shikhar Dhawan, India opening batsman, took to Instagram to share a video of him feeding “hungry animals” with his son Zoraver as his wife Aesha captures the dad-son duo. Dhawan, while sharing the video, said that teaching his son “the true values of life” is important and urged his fans to do their bit in helping the ones in need during these testing times. “As a father, it’s very important to teach my son the true values of life and one of them is to be kind to others, especially the ones in need. Feeding hungry animals during these tough times are important and I feel proud imparting such deep lessons to my son. Would request everyone to do their bit,” Dhawan captioned the video on Instagram.

Veteran India off-spinner Harbhajan Singh was one of the first cricketers who applauded Dhawan’s gesture.

Recently, Dhawan caught up with his opening partner Rohit Sharma and Mayank Agarwal in a show ”Open nets with Mayank” on bcci.tv.

During the chat, Dhawan opened up about his Test debut where he scored a century of just 85 deliveries against Australia in Mohali in 2013.

“It was one of my best performance,” Dhawan told Mayank Agarwal.

Dhawan, much like other cricketers during this forced break from the game, has been quite active on social media.

Earlier this month, Dhawan had posted a video of him getting a haircut from his son Zoraver.

Two-Thirds Of Sponsors Unsure About Tokyo Olympics Next Year: Poll

Leslie Jones Shares the Advice She’d Give Herself Before Protesting