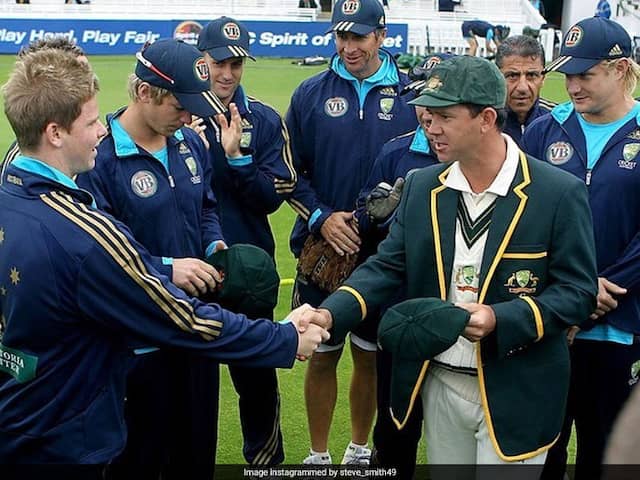 Steve Smith was given his “baggy green” cap by then Australia captain Ricky Ponting.© Instagram


It was on July 13, 2010, when Australia batsman Steve Smith made his debut in the longest format of the game. He played his first Test against Pakistan at the Lord’s Cricket Ground. Smith was handed the “Baggy Green” cap by the then Australian skipper Ricky Ponting. When the right-handed batsman had made his debut, he used to be spinner who could bat a bit. The now 31-year-old did not manage to have a good outing in his debut match as he scored just 13 runs combined in both the innings.

With the ball in his hand, Smith had managed to take three wickets in the second innings.

However, the right-handed batsman has cemented his place as one of the finest batsmen in world cricket.

The 31-year-old Smith is currently the number one ranked ICC Test batsman with 911 points and is closely followed by India skipper Virat Kohli with 886 points.

Smith was last seen in action against New Zealand in the first ODI of the three-match series.

After the first ODI, the series between both sides was postponed due to the coronavirus pandemic.

Smith would have been leading the Rajasthan Royals in the Indian Premier League (IPL) if the tournament had started on March 29.

However, the IPL has been postponed indefinitely due to the coronavirus pandemic.

England vs West Indies: England To Back Jos Buttler, But Joe Denly In The Firing Line

Etienne Stadwijk Releases Powerful Response to the Current Social Climate with new song and video “Then Why?!”