This is no 1991, but Sitharaman’s budget should boost growth, create jobs and stimulate a COVID-hit economy 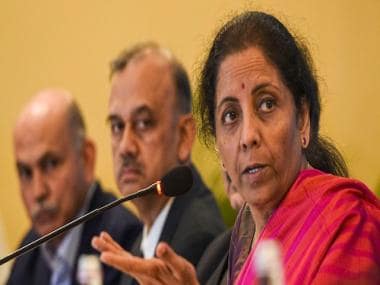 The best part of Union Budget 2021, however, is that Nirmala Sitharaman resisted the temptation to slap more cess, surcharges on the taxpaying citizens and refrained from imposing a ‘wealth tax’ to raise revenue.

When all that the Opposition can muster to criticise the Union budget is a tired, old rhetoric from the 1980s or a meaningless bombast, it is evident that Nirmala Sitharaman has nailed the political messaging. But what about the economy, that is showing signs of promise but overall struggling to emerge from the pandemic-induced recession?

If Sensex and Nifty reactions are anything to go by, then the finance minister has got the message around reviving the economy right, too, with the markets giving the 2021-22 budget a lusty cheer by posting the best budget-day rally since 1997. The BSE Sensex ended 5 percent higher at 48,600, snapping a six-day losing streak and recording the best single-day gain since April 2020 while the NSE Nifty gained 4.7 percent to end at 14,281.

Beyond the partisan politics and mercurial market sentiment, however, Sitharaman’s third budget comes across as a vision document that ticks the right boxes, takes the right amount of risk, and provides a much-needed boost to the COVID-hit Indian economy so that it may shake off the hesitation and go full speed ahead to script the Indian growth story. The IMF has predicted a double-digit growth for India – albeit off a very low base – but Sitharaman has been able to create the conditions to facilitate such an upward swing.

This is by no measure a 1991-style pathbreaking budget but with its massive, forensic focus on infrastructure, major hike in capital expenditure with a lower-than expected fiscal deficit, long-awaited increase in health outlay and mainstreaming of privatisation with the decision to divest two public sector banks and a general insurance company by 2022 for a disinvestment receipt of Rs 1.75 lakh crore – the budget achieves the right mix of caution and aggression. No wonder that industry captains, analysts and commentators have, subject to reading of the details where some devils may yet lie, been liberal with their praise for the finance minster.

The biggest decision that the finance minister had to take was to do away with fiscal conservatism and increase borrowing. For a government that had so far shown remarkable fiscal prudence, it finally took a pandemic to force Sitharaman out of the crease to raise the debt burden for spending. She has pegged the fiscal deficit at 9.5 percent of the GDP in 2020-21 with a targeted 6.8 percent deficit in 2021-22.

According to the finance minister’s budget speech, the Centre hopes to fund this through “government borrowings, multilateral borrowings, Small Saving Funds and short term borrowings.” The finance minister added that “we would need another Rs 80,000 crore for which we would be approaching the markets in these two months. To ensure that the economy is given the required push, our BE estimates for expenditure in 2021-2022, are Rs 34.83 lakh crore. This includes Rs 5.54 lakh crore as capital expenditure, an increase of 34.5 percent over the BE figure of 2020-2021. The fiscal deficit in BE 2021-2022 is estimated to be 6.8% of GDP. The gross borrowing from the market for the next year would be around Rs 12 lakh crores.”

“Of this,” said the finance minister, “I have kept a sum of more than Rs 44,000 crore in the Budget head of the Department of Economic Affairs to be provided for projects/programmes/departments that show good progress on Capital Expenditure and are in need of further funds. Over and above this expenditure, we would also be providing more than Rs 2 lakh crore to States and Autonomous Bodies for their Capital Expenditure.”

In the post-budget press conference, the finance minister said, “Our fiscal deficit which started at 3.5 percent during February 2020 has increased to 9.5 percent of GDP, so we have spent, we have spent and we have spent. At the same time, we have given a clear glide path for deficit management”.

A massive part of these expenditures would be directed at the infrastructure sector. The government has budgeted an outlay of 1.18 lakh crore for ministry of road, transport and highways.

“I am also providing an enhanced outlay of Rs 1,18,101 lakh crore for the Ministry of Road Transport and Highways, of which ₹ 1,08,230 crore is for capital, the highest ever,” said Sitharaman. But not just on roads, the finance minister’s budgetary outlay also covers increased spending on ports, highways, railways and power. Tamil Nadu, West Bengal, Kerala and Assam along with Puducherry face state elections in April-May and the finance minister’s announcements offer a unique insight into the way BJP approaches elections.

The list also includes metro railway projects such as Centre’s funding of 11.5km in the second phase of Kochi Metro Railway along with “substantial investments” in fishing harbours in Kochi, Chennai, Visakhapatnam, Paradip, and Petuaghat.

The political signaling in these announcements are undeniable but the declarations show that the government is willing to put big money in structural reforms and these, in turn, should encourage the private sector to come forward, thereby triggering a virtuous cycle that will create jobs, apart from ensuring growth.

The government’s seriousness about upgrading infrastructure is evident. The Indian Express reported, quoting road transport and highways minister Nitin Gadkari last month, that the NHAI has a target to build 60,000 km of highways in the next five years, including 2,500 km of express highways. These include 9,000 km of economic corridors and 2,000 km each of strategic border roads and coastal roads. Besides these, 100 tourist destinations and 45 towns would be connected through highways, according to the report.

The government’s disinvestment plan, that includes selling off two undeclared PSU banks and a GIC along with listing of the LIC where it holds 100% stake and dilution of its stake in IDBI Bank (where the government holds 46.5 percent), should also be a gamechanger in the way divestment has become part of a policy prerogative instead of an apologetic excuse. The figure of Rs 1.75 lakh crore from these divestments, a conservative estimate, however, indicates that the government is less confident of meeting its disinvestment targets going by past records. Monetizing of these existing assets, however, should be commended.

The best part of the budget, however, is that the finance minister resisted the temptation to slap more cess, surcharges on the taxpaying citizens and refrained from imposing a ‘wealth tax’ to raise revenue. This would have been a big temptation since India’s political discourse still tends to remain rooted to the socialist era. That Sitharaman did not take the easy way out and instead focused on policy prescriptions such as increased infrastructure spending and targeted disinvestment provided the basis for the record gains in bourses.

The steps to open up the insurance sector further, rationalization of taxation regime and steps in direct tax incentives to ease compliance for taxpayers, relief for senior citizens and dispute resolution committee for small taxpayers indicate signs of a thoughtful government. Overall, Sitharaman’s budget is a bug push towards India’s self-reliance, not a document for doles.