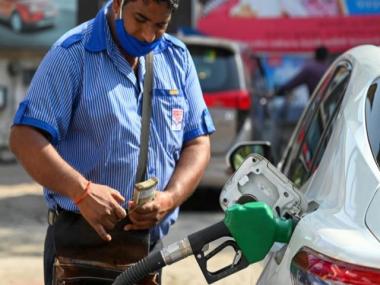 The prices of petrol and diesel vary from state to state and even from city to city. This is because there are various taxes imposed on fuel — both at the Centre and state level

The COVID-19 review meet with chief ministers on Wednesday turned into a Centre vs states tussle, when Prime Minister Narendra Modi brought up the issue of rising fuel prices and requested states to reduce the Value Added Tax (VAT) on fuel “in the spirit of cooperative federalism”.

In his meeting, Prime Minister Narendra Modi listed out prices of petrol and diesel in the cities and highlighted the states which had lowered VAT have lower fuel prices compared to the rest.

“I am not criticising anyone but request Maharashtra, West Bengal, Telangana, Andhra Pradesh, Kerala, Jharkhand, Tamil Nadu to reduce VAT now and give benefits to people,” the prime minister was quoted as saying, adding, “I am appealing to you for the welfare of your people, in national interest, please reduce VAT for the benefit of your people. What was to be done was not done, but please cooperate now.”

Post the meeting, some of the states hit back at Prime Minister Narendra Modi. Uddhav Thackeray and Mamata Banerjee both criticised Modi, saying his statement was ‘misleading’.

In this backdrop, we present this simple guide as to why fuel prices vary from state to state and why the Centre and states have often clashed on the issue.

Another notable fact is that the prices of petrol and diesel vary from state to state and even from city to city. For instance, petrol in Delhi is retailing at Rs 105.41 per litre on Thursday, while in Mumbai, it costs Rs 120.51. Similarly, the rate of diesel is Rs 95.87 per litre whereas it costs Rs 104.77 in the financial capital.

This difference in fuel retail prices in two cities is due to the different tax rates levied by the respective state governments on the same products.

It is also important to note that tax on fuel does not fall under the Goods and Services Tax (GST).

Taxes on petrol and diesel are split into multiple components at the state and central level. At the Centre, while some taxes are fixed, others are ad valorem, which means the tax is imposed as a share of the price of the commodity.

Similarly, the state taxes are also a mix of ad valorem and fixed. In many states, the ad valorem taxes have an upper limit, which means that even when prices increase beyond a point, taxes do not increase.

How much do states and Centre earn from fuel?

Petrol and diesel are two of the most highly taxed goods in the country and bring in huge revenues to both the Central and state governments.

Finance Minister Nirmala Sitharaman had told Rajya Sabha last year that the Centre had earned around Rs 8 lakh crore from taxes levied on petrol and diesel in the last three financial years. Out of the total amount, more than Rs 3.71 lakh crore was collected in 2020-21 itself.

To gain a better understanding of how fuel is taxed in India, the Stats of India Twitter handle had posted in March this year how much tax is paid for Rs 100 of petrol in various states in India.

Government data collated by Stats of India showed that in seven states, half of the price of petrol is collected as tax. This includes Maharashtra at Rs 52.5, Andhra Pradesh at Rs 52.4, Telangana at Rs 51.6, Rajasthan at Rs 50.8, Madhya Pradesh at Rs 50.6, Kerala at Rs 50.2 and Bihar at Rs 50.

The data showed that the states/union territories with the lowest taxes are Andaman & Nicobar Islands and Lakshadweep, Puducherry, Meghalaya, Mizoram and Arunachal Pradesh.

What did Modi say?

The issue of fuel taxes was raised on Wednesday when Prime Minister Narendra Modi accused some states of doing “injustice” to the people by not reducing tax on petrol and diesel during the COVID-19 review meet.

He called out the states of Maharashtra, West Bengal, Telangana, Andhra Pradesh, Kerala, Jharkhand, Tamil Nadu in the matter and added that he did not wish to engage in a debate about how much these states earned in terms of revenue in the past six months, but merely wanted the people to be provided benefits.

However, Modi’s statements didn’t go down well and quickly became a flashpoint. Maharashtra chief minister Uddhav Thackeray said the Centre owed Rs 26,500 crore to the state and also alleged the Modi government of giving a step-motherly treatment to Maharashtra, as per a PTI report.

“The Union government owes Rs 26,500 crore to the Maharashtra government. Maharashtra’s contribution in direct taxes collection at the national level is 38.3 per cent and its share in the GST (collection) is 15 per cent, but the Centre gives us step-motherly treatment, Thackeray said in a statement.

“I am sharing the details with public out of concern. Maharashtra gets 5.5 per cent share of the total central taxes on various items. If the VAT and central taxes are combined, Maharashtra collects maximum amount in the country, he said.

“Despite being the top contributor, Maharashtra is neglected by the Union government,” the chief minister said.

West Bengal chief minister Mamata Banerjee also slammed the prime minister, saying his remarks were misleading. “”Today’s interaction with Prime Minister Narendra Modi was completely one-sided and misleading. The facts shared by him were wrong. We have been providing a subsidy of Re 1 on every litre of petrol and diesel for the last three years. We have spent Rs 1,500 crore on this,” Banerjee said while addressing reporters at the state secretariat as quoted by PTI.

Why Chloe x Halle Are the Future of Music