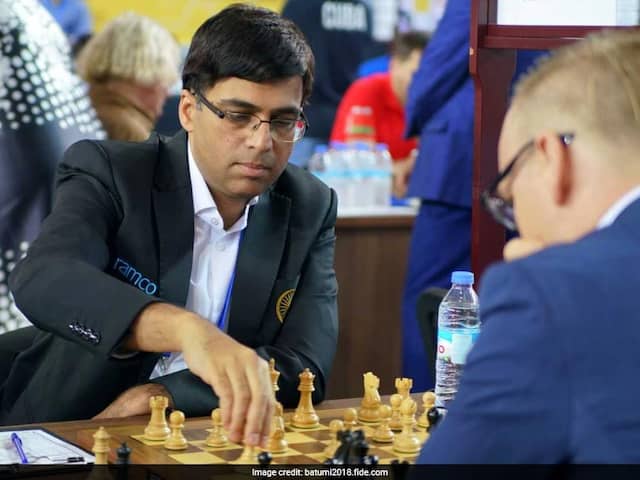 Viswanathan Anand languishes at the bottom of the points table in the Legends of Chess online tournament.© FIDE


Indian ace Viswanathan Anand struggled for the third consecutive round, losing to Russia’s Vladimir Kramnik to languish at the bottom of the points table in the USD 150,000 Legends of Chess online tournament. Anand went down 0.5-2.5 to Kramnik late on Thursday. The former world champion, who had lost in the first two rounds to Peter Svidler and Magnus Carlsen, respectively, could not turn things around. Anand lost the opening game despite some brilliant play as his Russian opponent fought back strongly.

A defeat in the second put the Indian No.1 on the back foot and a draw in the third ended his hopes. The Chennai-based Anand is making his maiden appearance on the Magnus Carlsen Chess Tour.

World No.1 Carlsen shares the top spot with Svidler, with three victories and nine match points.

Meanwhile, world No.3 Ding Liren continued to struggle as he lost after leading 1.5-0.5 to Ukraine veteran Vasyl Ivanchuk.

Anand and Liren lie at the bottom of the table, without a win ot their name.

The Indian meets Anish Giri (Netherlands) in the fourth round.

All the round-robin games are best-of-four game contests. Legends of Chess is an event where Carlsen, Liren, Nepomniachtchi and Giri, semi-finalists at the Chessable Masters (part of the Magnus Carlsen Tour), received an automatic invite.

They are up against six legends aged 40-52, who have been at the top of world chess at various points in their career.

The tournament is part of the Magnus Carlsen Chess Tour. The winner of this event will qualify for the $300,000 Grand Final scheduled from August 9 to 20.