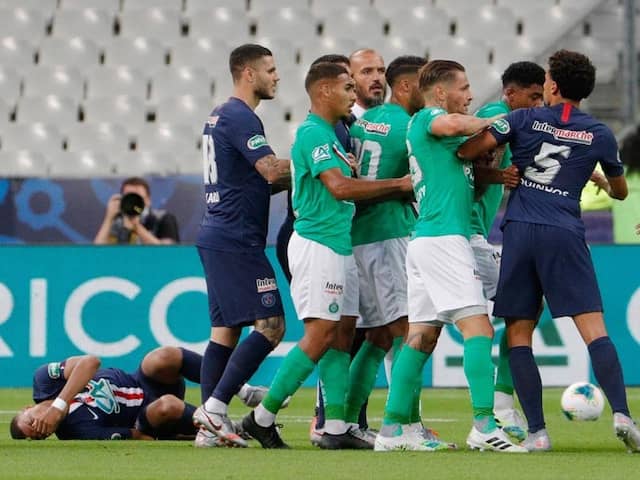 The two teams got into a shoving match after Loic Perrin’s dreadful challenge on Kylian Mbappe.© AFP


Paris Saint-Germain got the better of Saint-Etienne to clinch a record-extending 13th French Cup title but paid a heavy price with star forward Kylian Mbappe suffering an ankle injury, following a dreadful challenge from Saint-Etienne captain Loic Perrin. The big worry for PSG and manager Thomas Tuchel will be if Mbappe recovers in time for PSG’s all-important Champions League quarterfinal against Atalanta in Lisbon next month. Mbappe received a lengthy treatment on the field before making a tearful exit. He did reappear in the second half on crutches and also took part in the trophy celebrations after the match.

The incident took place in the 26th minute of the French Cup final. Mbappe, who proved too quick for Loic Perrin, was brought down with a horror tackle by the Saint-Etienne captain, which immediately resulted in a mass brawl.

As Mbappe writhed in agony on the ground, PSG and Saint-Etienne players got into a shoving match. Perrin was initially shown a yellow card but after consulting VAR, the referee gave him the marching orders.

After the players were separated, the referee dished out a total of six yellow cards.

OMG, what a horrible tackle from Perrin on #Mbappe. Hope he is fine

“Everyone is worried. Everyone who saw the foul is worried. Of course I’m worried,” said Tuchel.

“I’m very happy because we won but we have to stay patient because we don’t have any news. I think he will undergo tests tonight.”

“I hope Kylian is going to recover as quickly as possible because he’s a vital player for us,” said PSG captain Thiago Silva.