Wolves vs Everton: Wolves Bounce Back From 2 Successive Defeats With Win Over Everton 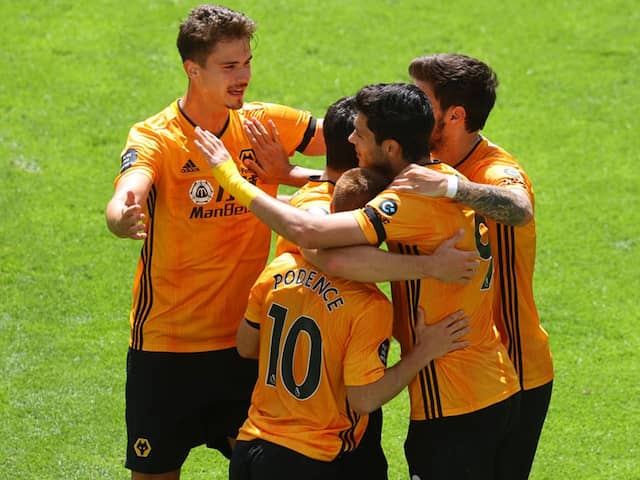 Raul Jimenez opened the scoring for Wolves as they beat Everton 3-0.© AFP


Wolves bounced back from back-to-back defeats to move into the Premier League’s top six on Sunday by inflicting another miserable away day on Everton in a 3-0 win at Molineux. Raul Jimenez’s penalty and Leander Dendoncker’s header a minute either side of half-time put the game out of Everton’s reach before Diogo Jota beat Jordan Pickford at his near post 16 minutes from time to round off another performance that will see the England number one scrutinised.

Victory lifts Nuno Espirito Santo’s men back ahead of Sheffield United into sixth and within four points of fourth-placed Leicester, who face Bournemouth later on Sunday.

Fifth could also be good enough for the riches of Champions League football next season should Manchester City’s appeal against a two-season ban from European competitions fail when the Court of Arbitration for Sport’s verdict is revealed on Monday.

Should Wolves win their next two games against Burnley and Crystal Palace, they could have the chance to snatch Champions League football from Chelsea when they visit Stamford Bridge on the final day of the season.

Goals have been hard to come by for Nuno Espirito Santo’s men since the season’s restart last month with just four in their previous five games.

But they were given a helping hand by an Everton side meandering towards the end of the campaign with little purpose.

Daniel Podence lured Lucas Digne into committing a penalty in first half stoppage time and Jimenez coolly sent Pickford the wrong way for his 25th goal of the season.

Dendoncker doubled the hosts advantage early in the second half as he flicked Pedro Neto’s in-swinging free-kick into the far corner.

Pickford has made a string of eye-catching errors since the Premier League’s return and was inches away from conceding an embarrassing third as Podence’s shot squirmed between his legs before he just recovered in time to prevent the ball going over the line.

Burnley’s Nick Pope shone in a 1-1 draw at Anfield on Saturday to end Liverpool’s perfect home record in the Premier League this season to further his case for ousting Pickford at international level.

And the Everton stopper did his case little favours when Wolves’ third goal did arrive as Jota controlled Ruben Neves’s great long pass over the top before firing in at the near post from a narrow angle.

WhatsApp Web dark mode is here: How to enable it